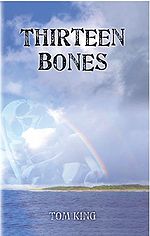 Thirteen Bones is Tom King's new novel (2009). It is based on what TIGHAR has found on Nikumaroro. For more details about and excerpts from the book, see Tom's own website.

On July 2, 1937, nearing the end of a flight around the world, aviation pioneers Amelia Earhart and Fred Noonan disappeared over the Pacific. Despite a massive search, they were never found. Their fate remains a mystery to this day.

Earhart's last generally accepted radio message put her on course that likely would have brought her close to Nikumaroro - then called Gardner Island - a tiny, uninhabited atoll in the Phoenix Islands.

In early 1939, British authorities in the Gilbert and Ellice Islands Colony launched the Phoenix Islands Settlement Scheme, and began to clear Gardner Island for coconut planting. In early 1940, the colonists found thirteen human bones near the island's southeast end, along with a sextant box, a Benedictine bottle, some corks, and parts of a woman's shoe.

In Thirteen Bones, author Tom King imagines the discovery and its aftermath through the eyes of the discoverers.

Thirteen Bones is fiction, incorporating facts uncovered by The International Group for Historic Aircraft Recovery - TIGHAR - during twenty years of investigation into Earhart's and Noonan's disappearance. It includes the flurry of telegrams that went between Settlement Scheme Administrator Gerald B. Gallagher and his superiors in Fiji, reporting the discovery and deciding what to do about it. It proposes a geopolitical reason that the British authorities did not report the discovery to the Americans - even though the bones were suspected to be Earhart's.

Woven around the tale of the bones, Thirteen Bones tells the story of the Nikumaroro colony, its tragic hero Gallagher, and its adventurous Tunguru (I-Kiribati) and Tuvaluan colonists. The Phoenix Islands Settlement Scheme (whose acronym its creators cherished) was one of the last expansions of the British Empire. It was created as the world spiraled into war, and it died as Great Britain struggled to adapt to post-war realities.

Nikumaroro is a tiny island, and its people had limited contact with the outside world - a world that Thirteen Bones' protagonist, Keaki, dreams about and struggles to understand. But that world imposed itself on the island's small community in many ways - not least, perhaps, by making Nikumaroro the place where Amelia Earhart left her bones.