From TIGHAR
(Redirected from Gallagher)
Jump to: navigation, search

Gerald Bernard Gallagher was a British colonial officer of Irish extraction who was assigned to the Crown Colony of the Gilbert and Ellice Islands, arriving in 1937. He subsequently became Administrator of the Phoenix Islands Settlement Scheme, and was responsible (with Magistrate Koata and other colonists) for the 1940 discovery of human bones on Nikumaroro that may have been Earhart's. See "Gallagher of Nikumaroro: The Last Expansion of the British Empire" by TIGHAR's lead archeologist, Tom King.

"Gerald B. Gallagher is the twenty-nine year old Colonial Service cadet who has recently been made Officer-In-Charge of the new Phoenix Island Settlement Scheme. Known to his fellow officers as Irish and to the Gilbertese islanders as Karaka, Gallagher is a remarkable character. He is well over six feet tall, a Roman Catholic (unusual in the Colonial Service), and utterly dedicated to the impoverished islanders who are trying to carve out a life on the previously uninhabited islands of Sydney, Hull and Gardner in the Phoenix Group. Colonial officer Eric R. Bevington describes Gallagher as 'the most Christ-like man I’ve ever known.' Gallagher and Bevington had come out from England as Cadet Officers together in the spring of 1937."[1]

N.B. In the following notes, the relationships are those of the persons Gerald B. Gallagher--grandfather, father, first cousin twice-removed, etc.

On her solo transatlantic flight, 20-21 May 1932, Earhart landed in a field owned by a member of the Gallagher clan. The Amelia Earhart Centre in Derry was built to commemorate her landing there but seems to have been closed in 2009 due to lack of funds.[3]

"The coffin was draped with a new Union Jack and was carried on the shoulders of representative numbers of Europeans, Fijians, Ellice Islanders and Gilbertese.

"At the graveside Lieut-Commander Mullins read the burial service of the Roman Catholic Church and the hymn “Nearer My God to Thee” was sung by the Europeans present. Lieut-Commander Mullins spoke a few simple and appropriate words (a copy of which have already been given to His Excellency). The Protestant natives sang a hymn in Ellice, and subsequently Maheo, an Ellice Islander, and one of the native wireless operators, paid a simple, eloquent and most touching tribute (in English) to Mr. Gallagher’s memory. After the grave had been filled in, the native women on the station placed garlands of bush flowers around it."[2]

At his mother's request, Gallagher's body was exhumed when Niku was abandoned in 1963 and buried on Tarawa in a Catholic cemetery.

There are several interesting things about this:

1. The shipping/consignment requests for Gallagher's personal effects to be shipped to England to Gallagher's aunt occurred in 1941.
2. Someone may have initiated an inquiry before 7 August 1945. Potential "someones" are

Discussion: Although Germany had surrendered, the war in the Pacific was still raging with every expectation of an amphibious assaults on the Home Islands of Japan in November, 1945, and Spring, 1946. Strange time for this topic to come up except......We have information on Edith Annie Clancy that tells us that she was a person of some influence in England (she did, after all, have the clout to get Gallagher's remains moved to Tarawa in 1968 (or not), that she was cited in the London Gazette for her war contributions, and that she was on the list for the Coronation Medal for Queen Elizabeth II in 1954. Did she ask where the effects of her son were? Did that trigger the 7 August 1945 telegram to see where the effects are and/or what happened to them?

b. his father Gerald Hugh Gallagher (who died in 1968).
c. his aunt, Louisa Patricia Clancy.

Discussion: she was supposed to have received the effects in late 1941. In the general euphoria of the surrender of Germany, did she inquire when the effects would finally be delivered?

d. Someone on their own initiative in the WPHC

Discussion: Would someone in WPHC followup on an almost 4 year old "open action item", and, if so, what would they do? Possible avenues: a) find out if the owner, Edith Annie Gallagher, still wanted the effects shipped to Louis Patricia Clancy at the old address or shipped somewhere else; b) find out what ever happened?

TIGHAR has not been able to track where the trunks containing Gallagher's personal property were shipped. We know from WPHC records that shipment was delayed until late in the war. The WPHC wrote W. R. Carpenter Shipping on August 7, 1945, to ask them to pick up four trunks containing Gallagher’s belongings and ship them to his mother in England. The notes that follow were taken during an interview with Tofiga's daughter, who had a long and very successful career with W. R. Carpenter.

Settlement of the Estate

Last entry: 2nd October 1945, GS Barrack pays the Hercules Cotton Company in Sydney, Australia. It took him 5 years and many letters to collect his 29-2-10.

The estate got charged for Gallagher's mess bill from his last trip on the Viti in 1941--the voyage on which he died.

Harry Evans Maude was the administrator of the estate (30 May 1945) according to D.C. McKee.

24 September 1944 "Constable Esele makes a claim for the Gilbertese canoe on the grounds that five months before his death Mr. Gallagher said to him these words, "When I leave the Colony you shall have this canoe" of course this is no legal claim, but meanwhile the canoe referred to is in the boat shed on Gardner Island awaiting disposal. The Ellice type canoe was given to Aram in trust for his son BENATI who was a kind of God-son of the deceased."

Two lines below, initials or abbreviation that have not yet been deciphered.

Plaque left on Niku by TIGHAR 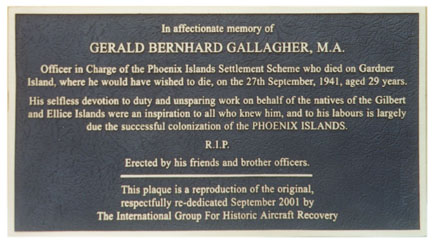