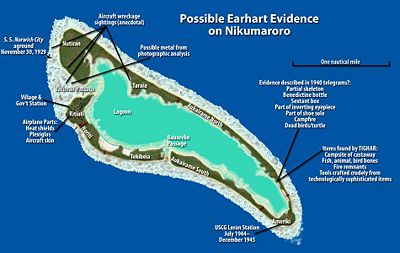 Parts of the island have been named on at least two occasions. The names assigned by the P.I.S.S. colonists have "stuck," while those assigned by the New Zealand survey party have not. The former are shown in Figure N-2, the latter in Figure N-3 {figures not yet supplied}. 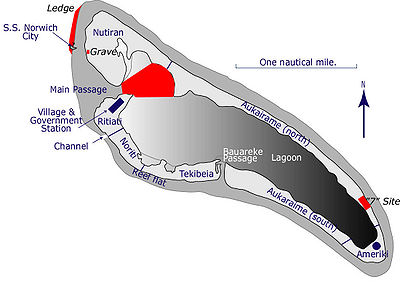 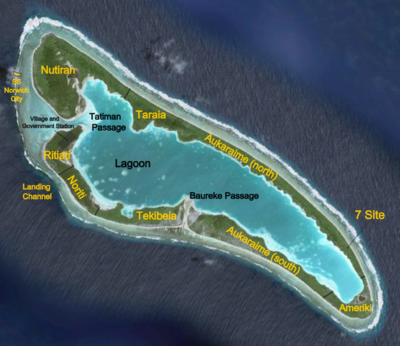 The northwestern bulbous end of the island was called Nutiran (pronounced "Nusiran") by the colonists, presumably because it was where the New Zealand surveyors were camped when the first working party arrived in 1938. One early resident, however, said that it was so named because the Norwich City was understood to have come from New Zealand.

"The village" is an ambiguous term; readers must take the various eras of settlement into account to interpret what part of the island (Ritiati and/or Noriti) is intended by an author. The Government Station is in Ritiati.

Ritiati merges to the south-southeast with Noriti (Norish), named for the Norwich City wreck, clearly visible from the Noriti shore. Noriti in turn is followed by Tekibeia, which runs to the more southern, narrower of the two channels, Baureke Passage.

Beyond Baureke is Aukaraime (Ow-kar-rhyme-ee), which originally apparently made up the entire southeast end of the island. When the American LORAN station was established at the very southeast tip of the island, this area came to be called Ameriki, dividing Aukaraime into two units -- Aukaraime North on the windward side of the lagoon, Aukaraime South on the lee side.

Aukaraime North runs along the lee side to a rather indeterminate point where it merges with a parcel called Taraea, which in turn borders Nutiran. Taraea is dominated by a point of land jutting into the lagoon opposite Tatiman passage; according to Laxton it was named during his tenure on the island, based on the initial syllables of several colonists' names.

The wreck of the SS Norwich City, discussed elsewhere, is undoubtedly the island's pre-eminent landmark. Though it is deteriorating rapidly, and may be invisible in a few more years, it has been a dominant visual presence on the lee side of Noriti since it went up on the reef in 1929.

Although at various times landings on the island were made across the Norwich City wreck on Nutiran, through Tatiman Passage, and on the ocean shore in Noriti boundary, at some point fairly early in the history of the colony the point at which landings are now made, in southern Ritiati, became the landing place of choice, and has since then been commonly referred to as "the landing." Since the early 1960s, when it was created to facilitate disembarking the colonists, this site has been marked by a channel blasted through the reef flat to permit easy access to the beach regardless of tide (though not regardless of weather and sea state). Until 1990, when it was destroyed by a westerly storm, the landing was also marked by a monument some five meters high, built of coral stone and reinforced concrete.

The New Zealand survey party in 1938-1939 named many parts of the island (Figure N-3), but these names do not seem to have been used by the colonists. For our own purposes we have resurrected the name "Kanawa Point" to refer to the reputed site of Nei Manganibuka's "Ghost Maneaba."

Beyond Noriti, where we had turned back because of the thick bush we found patches of coconut jungle where the young nuts, falling and taking rest, drove out all other plants. Beyond here, on a lagoon peninsula, Ten Aram showed the site of the "ghost maneaba." The wife of Teng Koata, the first island leader, had been walking one afternoon and saw a great and perfect "maneaba', and sitting under its high thatched roof Nei Manganibuka, a tall fair woman with long dark hair falling to the ground around her, with two children: she conversed with three ancients, talking of her island of Nikumaroro, and the happy future when it would surely grow to support thousands of inhabitants. Near by, on either side of the peninsula two large pools form on the lagoon flats, filling on the high springs, when tens of thousands of young "baneawa" fish take refuge in them from the ravenous "ulua" which prey on them in the deep water. As the tide falls, the fish crowd ever more closely and the seabirds, particularly the great black frigate birds sweep and dive in hundreds, screaming and crying with frenzied joy at the succulent dish below them; unless indeed the Gilbertese come, and driving away the birds, scoop up the fish for their own food. A rich and tasty fish, too, resembling whitebait.

Two consultants reported that the High Commissioner's party embarked from the ocean side of this area at the end of his state visit of November-December 1941. Both remarked on the kanawa trees that grew there at the time, but neither had anything to say about Nei Manganibuka or the Ghost Maneaba.

Other reports of Nei Manganibuka may or may not refer to Kanawa Point, and reports of female anti may or may not refer to Manganibuka. Risasi Finikaso of Funafuti, who lived on the island as a child, reported that a place on Nikumaroro called Niurabo was sacred to Manganibuka, but she did not know its location. Erenite Kiron of Nikumaroro Village on Waghena Island in the Solomon Islands reported that the ghost of a woman with no face had been seen at a place called Moorahb or Noorahb.

Undoubtedly other parts of the island were given names by the colonists, but none of these names have survived. TIGHAR has given informal names to a number of locations in the course of our fieldwork; these will be identified as needed on other pages.