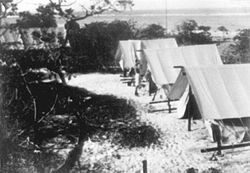 Campsite of the New Zealand Pacific Aviation Survey in 1938. The camp was near the Norwich City survivors camp of 1929 on Nutiran. (Courtesy, Wigram Air Force Base Archives, RNZAF) 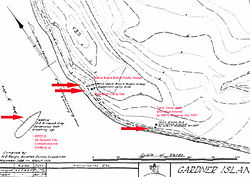 Late in 1938 an expedition was undertaken to evaluate certain British islands in the South Pacific for their suitability for aviation operations, both the construction of airfields and the use of lagoons by flying boats. In charge of the project, known as “The New Zealand Pacific Aviation Survey,” was RNZAF Squadron-Leader E. A. Gibson.

This portion of the island where the New Zealand survey party was encamped when the first Gilbertese settlers arrived became known as Nutiran (pronounced "new see run").

"A tin has been found in the archives of the Royal New Zealand Air Force containing forty-one aerial photographs of Gardner Island (now Nikumaroro) taken just fifteen months after the Earhart disappearance and before the first official inhabitation of the island."

The contents of the tin are "the complete set of aerial obliques taken on December 1, 1938 by a Supermarine Walrus launched from HMS Leander in support of the New Zealand Pacific Aviation Survey."