From TIGHAR
(Redirected from Monte Carlo)
Jump to: navigation, search

Every serious Earhart researcher has tried to reconstruct Earhart's last flight from Lae to Howland, including TIGHAR researchers. Nearly everyone comes to a definitive conclusion to the exclusion of all others. It is safe to say that there is no one single solution to this problem, for the simple fact is that there is not enough data available to constrain precisely where Earhart went or came down. It is similar to trying to solve a set of equations with three unknowns, but with only two equations: a number of possible solutions exist. However, certain solutions can be ruled out as improbable, and other solutions can be ruled possible.

First, let us examine the actual set of data constraining the flight parameters. These are the data that can be used to constrain Earhart's flight, in general order of importance:

Notice that we did not include any weather information constraining the flight, as we have no direct observations of upper air velocities during the actual flight itself.

Other, implied or assumed, data can be used for constraining the flight, but caution must be taken when using these data.

Finally, every researcher has made this critical mistake in attempting to reconstruct the flight, by assuming that the information Earhart provided was accurate, timely, and could be combined with other information unknown to Earhart. Earhart, when she left, had certain preconceived notions as to weather and how to correct for them, and should be considered a priori constraints, or those constraints known prior to take-off. Weather reports, for example, taken by the Ontario and Itasca during the actual flight, are probably not known to Earhart, yet are known to us. These data are considered a posteriori data, or data known after the fact. A priori and a posteriori data should never be considered as a single set of data constraints; rather, a model should be calculated using a priori data, and checked against a posteriori data to determine if a match is possible. If not, the model should be discarded; if a match is made, it means that the model is possible.

In point of fact, what Earhart transmits to the outside world is a completely different set of data than what the outside world knows about the flight, and vice versa. For example, she states at 1030GMT that she sees a ship in sight ahead, but doesn't know where precisely that ship is. We know, however, where both the Ontario and MV Myrtlebank are, and can use that data to help constrain where Earhart was at 1030GMT. Another example is that Earhart sees no difficulty in reporting 200 then 100 miles out 26 minutes apart. From her point of view, she has provided the two most accurate positions available to her, but she doesn't state at what time those positions were. If the outside world was to accept these position reports on face value, there are two immediate discrepancies:

(1) the speed necessary to accomplish these two ranges violates a known data constraint, that is, 130 knot cruising speed, and

(2) if they were truly accurate, why didn't Earhart see and land on Howland?

Most researchers state that the dawn occurred between the two fixes, so that Noonan was able to update his position, accounting for the position errors. However, discrepancy number 2 is still left.

Another flaw in researcher's analysis is trying to reconstruct the flight using paper and pencil, as though there was only one solution that fit the data. There are literally millions of possible flight permutations that fit the available data, and it is only by using the computer and Monte Carlo simulations that any hope of determining the flight path can be considered. Monte Carlo methodology is a brute force means to obtain a solution to a set of equations or problem: literally thousands, if not millions, of possible solutions are examined. Some of these solutions are not valid, since they violate known data constraints; whereas others are assigned probabilities, based upon probabilistic estimates of input parameters. For example, let us consider that Earhart accounted for expected cross-winds, based upon forecasts, during her flight. She received a number of forecasts, and we must assign a probability to each forecast that she may have used. Similarly, we have to assign probabilities to actual wind aloft velocities and directions, extrapolated from surface measurements. Once all of these probabilities have been assigned, the Monte Carlo simulations are run, and what results is a probabilistic map of Earhart's position as a function of time. Even if there was a sharp peak in the distribution at any particular time, that does not mean Earhart was actually there; she could be anywhere where the probability is non-zero. The best use of Monte Carlo simulations is not only to determine the most likely flight, but where Earhart could not have gone.

TIGHAR researchers, with the help of Dan Wagner and Associates, coded up a Monte Carlo simulation of Earhart's flight. We used a very conservative scenario, one that assumed that Earhart had no means of determining her position, and that the entire flight was made by dead reckoning. The model was started at 0718GMT at her reported position, again with probabilities assigned to this position. Further, various constraints could be "flagged" on or off, to determine their ultimate effect upon the model. Two joint models were made for each Monte Carlo simulation: one using all of the a priori information available to Earhart, called Earhart's Expected Path, and one using only a posteriori data, called Earhart's Actual Path. There is no reason to expect that the two joint models should or must coincide, but each are joined since they have certain information in common. That data consists of "ship in sight ahead", the overflight of Tabiteua, and radio propagation characteristics information. The positions provided by Earhart were given a probability distribution not only in space (for inaccuracies of fixes), but also in time, since it is quite probable that the position reports she provided were not the immediate positions when broadcast. While the probability density functions of each of these is up to the researcher to decide, certain fundamental information comes out from the Monte Carlo simulations.

All of the flight data provided by Earhart, with the possible exception of "ship in sight ahead", can be fit with a variety of paths. In other words, there are no internal inconsistencies with Earhart's data that she provided. The 200 and 100 mile out position reports are compatible simply because those positions were not the positions at the time she broadcast her messages, but were positions made somewhat prior to those times. Radio propagation characteristics and related distances had little if any bearing on the Monte Carlo solutions, as we did not use signal strength as a constraint, simply because we had no first hand information as to where that information came from, or how to relate it to objective values of range. The solutions without "ship in sight ahead" constraint placed Earhart squarely between Ontario and Myrtlebank, giving us an indeterminate solution as to which ship she saw. If the 0718GMT position was made closer to the broadcast time, the probability should go towards the Ontario and vice versa. Finally, when Earhart believed she was at Howland, the plane was actually somewhere about 100 to 135nm to the SW of Howland. Caution must be used, however, as it was assumed that Earhart did not have a single celestial fix to update her flight, and that her entire Expected Path was based solely on dead reckoning.

The point, however, is that the flight more than likely went to the SW of the intended flight path. What caused the offset between Expected and Actual to the SW? It must be weather related, as there are no other factors that can account for this large discrepancy. With no constraints in the simulations, at 0718Z, the difference between Expected and Actual is a negligible distance. At Ship Sighting time, 1030Z, the difference had increased to 24.3nm, bearing 261 degrees. At 1912Z, the difference is now 49.5nm at 208 degrees. Clearly, Earhart's weather information was more favorable than what actually happened. This is borne out by the weather forecast for Ontario of 18 knots vs. 20 knots for much of the time after she passed the Ontario. Another factor is that Earhart's forecast wind speeds were at elevation, so the figures were not adjusted for increased speed with height above the sea or rotation to the north, as were the Ontario winds. Thus, we actually calculate much of the time during the MC simulations that Earhart was experiencing 26 knot winds from roughly 58 degrees, rather than the 18 knot winds from 68 degrees as forecast. Adding the 200nm, 100nm, and Must Be On You constraints worsens the difference between Actual and Expected, suggesting that Earhart was really navigating more on dead reckoning than actual sightings. This it is the weather during the middle segment of her flight that contributes most to the unanticipated headwinds and southerly crosswinds Earhart experienced.

This plot is what the Monte Carlo runs predicts for the probability distribution for what Earhart believed was her location at 1912Z: 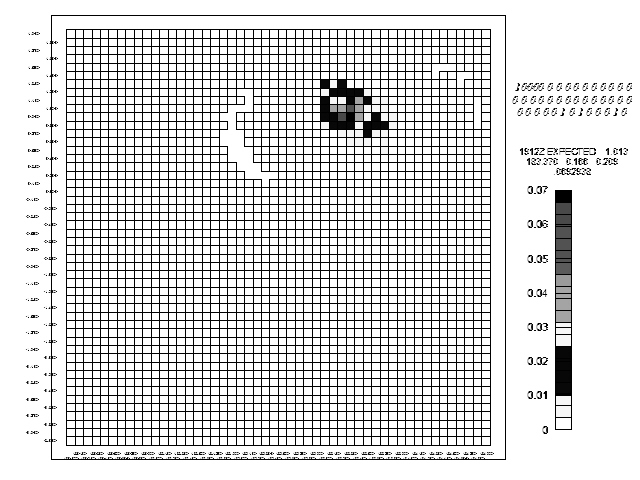 This is a plot of what the Monte Carlo runs predicts for the probability distribution for what is believed Earhart was located at 1912Z: 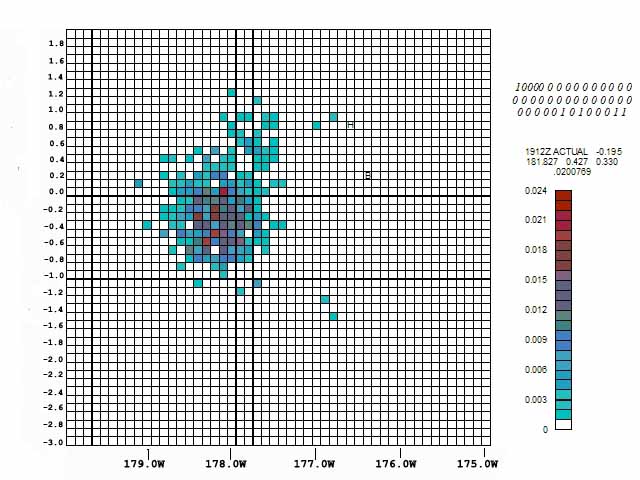