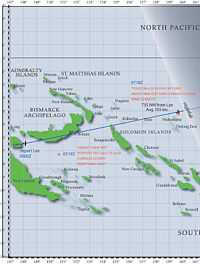 The precise time of the Electra’s departure from Lae, like that of so many other events during the final flight, is open to question. Nearly all sources state that the takeoff was made at 10:00 A.M. local time, which was coincidentally 0000Z. Doris Rich (Amelia Earhart – A Biography, 1989), however, alleges that the takeoff occurred at 10:22 A.M. and cites “Collins, Tales of an Old Air-Faring Man” as her source. Unfortunately, the citation is in error. The book states the takeoff time as 10:00 A.M. Where Rich got the 10:22 A.M. time is a mystery but twenty-two minutes sounds about right for the time it might take to taxi from the Guinea Airways ramp to the far end of the 3,000 foot runway, warm the oil, do the run-up, and commence the actual takeoff run. Was 10:00 A.M. the time the airplane taxied out or the time it began its takeoff roll? If the throttles didn’t go full forward until 10:22, then subsequent estimations of time en route and fuel consumed should be based on that time.

The point is, any pretense of precision in reconstructing the fuel situation at any point in the flight is folly.

Similarly, placing the aircraft at any particular point in space at a particular time is problematic. The first radio report received at Lae was heard about four hours after departure and gave no position information. The second report an hour later gave a lat/long position that makes no sense. As Dr. Randy Jacobson wrote in "The Final Flight", “The coordinates related by Chater place the airplane well south of the intended route and, although the flight had been en route for 5 hours and 19 minutes, the position reported is only 186 nm from Lae, giving the airplane a ridiculous ground speed of 37 knots. The reported 10,000 feet of altitude is higher than the 8,000 feet recommended by Kelly Johnson for best fuel economy on this portion of the flight. None of this message makes sense in the light of the reported comment “everything OK,” and we must conclude that either the message or its transcription was inaccurate.”

The third and final message heard at Lae gives the plane’s position at a point near its intended course and just beyond the Nukumanu Islands. Randy says, “At 0718 GMT, the last and final message was received by Lae personnel from Earhart. Chater reports: “Position 4.33 S 159.7E height 8000 feet over cumulus clouds wind 23 knots.” Collopy states: “The next and last message was to the effect that they were at 7,000 feet and making 150 knots, this message was received at approx. 5 PM local time.” Again, there are discrepancies between the two reports. The position provided places the plane in the vicinity of the Nukumanu Islands (4.3°S, 159.30°E). No time was provided for when this position was obtained. This position is 735 nm from Lae and is right on course for the great circle route to Howland, and seems suspiciously to be a dead reckoning position. First, there were no good maps of the Nukumanu Islands at small scales in 1937; secondly, Noonan had a habit of marking half-hourly projections along the intended flight path and was known to relay these positions to Earhart (see discussion on the Oakland to Honolulu segment previously); navigation during daylight hours was limited to lines of position shot from the sun and any visual landmarks; and the double digit accuracy of the latitude position seems unusual but it may simply indicate 1/3 of a degree. The reported altitude of the plane (8000 feet) is consistent with fuel economy plans, but Collopy’s 7000 foot altitude and speed makes more sense if he was referring to the message received 3 hours earlier. The wind speed of 23 knots seems consistent with the Nauru observation of 24 mph (19 knots) at 7500 feet, but Earhart did not give an indication of wind direction. Finally, we note that the plane is above the clouds just as dusk is approaching, allowing Noonan to obtain celestial fixes.”

The message was received in Lae at 0718Z on the arranged schedule. The plane was at the given position some time before then, but there is no way to know just when. Evening was approaching and Noonan may have been able to get two or even three stars. Even a talented navigator requires several minutes to take sightings, perform calculations and plot a position. A reasonable guess might be that the given lat/long represents the plane’s position at 0700Z. The position is 735 nm from Lae. If the takeoff was made at 0000Z the plane had made an average groundspeed of 105 kts. If the plane didn’t takeoff until 0022Z, the average speed was 116 kts.

Without some indication of direction, Earhart’s report of “wind 23 knots” is meaningless, but if the plane was making its usual cruising airspeed of 130 kts, a 000Z takeoff and a 23 knot headwind would yield an average speed of 107 kts – very close to the 105 kts average mentioned above. On the other hand, a 23 knot tailwind would yield a groundspeed very close to Collopy’s claim that Earhart said they were “making 150 knots.”

About all we can say with any certainty about the first section of the flight is that roughly seven hours after departure the aircraft had covered a little over 700 nautical miles, was on course and proceeding normally. If Earhart was following a fuel management plan similar to the one Kelly Johnson had recommended for the Oakland/Honolulu flight in March, and depending upon whether she left Lae at 0000Z or 0022Z, she had burned somewhere between 415 and 450 gallons of fuel and had between 685 and 650 gallons remaining.