From TIGHAR
(Redirected from Howland)
Jump to: navigation, search 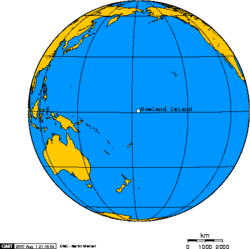 Howland is approximately two miles long and about a half-mile wide. It is low-lying and has only scrub brush on it.

Nikumaroro, by contrast, is approximately 4 miles long and about a mile wide, with a bright lagoon, higher elevations, and larger trees.

"It's 350 nautical miles from Howland to Gardner [i.e., Nikumaroro]. At 130 knots (the Electra's normal cruising speed at altitude), that would take 2 hours and 41 minutes. But that doesn't mean much. We don't know how close she was to Howland and we don't know what speed she was using when she was 'running on line'" Gillespie, Forum).

Elgen Long claimed that the charts used by Noonan had the wrong coordinates for Howland Island.

In August of 1936, the Coast Guard vessel, the Itasca accurately plotted the Line Islands including Howland. It found that Howland was plotted 5 1/2 miles west of its real position. Long would like one to believe that this information was CLASSIFIED and therefore not available to Earhart for her Pacific flight.

Ask yourself this question. If this island had been mis-plotted it would have been a hazard to navigation. The United States was not at war at that time and had no declared enemies, therefore why would it be classified?

There is no doubt that this information was made available to all mariners (Notice to Mariners) world-wide. It is inconceivable that Noonan would not have received the information that was discovered almost a year before the Earhart flight. The Coast Guard was fully aware of Earhart's plans to fly around the world and to use Howland Island as a refueling stop. They were charged with providing whatever help they could to make the Earhart flight a success. Withholding such vital information is incomprehensible.

In a recent book about Amelia Earhart titled East to the Dawn, page 408 the author discusses this very point. Ms. Butler says "The chart of the area then in use #1198, Published by the hydrographic office within the Navy, contrary to the assertion that it showed Howland Island wrongly placed, in fact was reasonably accurate. According to the last chart correction made by the U.S. Government dating from 1995, the coordinates to the beacon on the west side of Howland are: latitude 00 degrees 48 minutes north. longitude, 176 degrees 37 minutes west. The chart Fred was using showed Howland within half a mile of those coordinates. When years later, emulating Amelia's world flight, Ann Pellegreno used the latitude and longitude that Fred Noonan had used for Howland. She found they were correct."

"For obvious reasons, Earhart’s strip map and navigational instructions for the trip to Howland are not available for inspection. However, charts for the same flight, prepared by Clarence Williams on February 9, 1937 but from the opposite direction, are now in the Special Collections archive at Purdue University in West Lafayette, Indiana. These show a great circle route representing the shortest distance, 2,556 statute miles (2,223 nm), between the two points, based upon 16 way points. Williams uses the position of 0°49′N, 176°43′W for Howland, the accepted position at the time, corresponding to 2219 nm along a great circle route. CDR W. N. Derby, USCG, commanding officer of the Itasca in 1935, had already sent a letter to the Naval Hydrographic Office detailing the latest, accurate, position for Howland as 0°50′30″N, 176°34′30″W. On Aug. 17, 1936, William Miller, in his 6th Equatorial Cruise Report, reported that a revised position of Howland was determined to be 0°48′6″N, 176°38′12″W. A copy of this cruise report was retained by Bill Miller for his office files, and he undoubtedly had access to this information when conferring with Earhart prior to her departure. Whether he gave her the latest position information for Howland is unknown. The distance from Lae to this revised, corrected, location for Howland is 2223 nm. The difference in positions for the various Howland locations are on the order of 5 nm, an insignificant amount should one come upon visual range of the island itself" ("The World Flight, Second Attempt: Intended Route to Howland"). 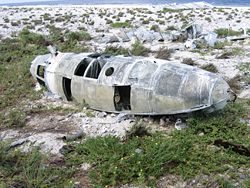 A float from the Martin Mariner.

On 10 June 1944, a U.S. Navy Martin "Mariner" flying boat, PBM-3-D BuNo 48199, had an engine fire and made a forced landing just offshore from Howland. The pilot intentionally beached the aircraft and the crew escaped unharmed; they later set the aircraft on fire deliberately.[1] The crew was rescued by the USCG Balsam (the same ship that later took Unit 92 to Gardner Island) and transferred to a sub chaser which took them to Canton Island. 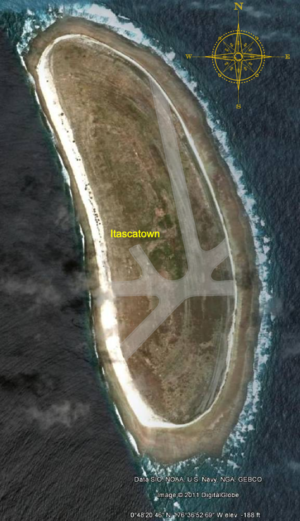 This excerpt from Finding Amelia tells the story of how the airfield at Howland Island was constructed in preparation for Earhart's round-the-world flight.

Three 150 foot-wide runways had been planned for Howland. The coral would be graded and rolled to create a north/south strip 4,000 feet long and a northeast/southwest strip 3,000 feet long but, due to the prevailing easterly winds, the runway most likely to be used was the east/west strip. Due to the shape and orientation of the island, this was necessarily also the shortest strip at 2,400 feet. By March 4, Black was able to forward word from [Robert] Campbell[2] that the east/west strip was finished, but the next day brought news that the tractor had suffered a serious mechanical breakdown that “will not allow completion of northeast/ southwest runway as originally planned.”

At long last, on Saturday, March 13, a message was received from Campbell on Howland with apologies that static interference had precluded communication for the past three days. Two runways were now completed; the east/west at 2,400 feet and northeast/southwest at 3,000 feet. The north/south strip would be finished by March 15 with a length of 5,200 feet. Richard Black announced that the airport had been officially named “Kamakaiwi Field” in honor of James Kamakaiwi, the Honolulu boy who had been the first Hawaiian to go ashore on Howland when the island was first colonized on March 30, 1935 and had been the leader of the colonists ever since.

Problems seeing Howland from the air

James Christian Kamakaiwi: "We watched the sky, hoping to pick the plane out against white cumulus clouds which were all around the horizon."

"The 1937 Search: The First 24 Hours": "But sometime in the next few minutes Thompson changed his mind and became convinced that Earhart was not still aloft but was, in fact, already down at sea. At 10:40 (22:10 GCT) he abandoned his station at Howland (after having just told San Francisco he would stay there until noon) and steamed off to the northwest. He indicates in his Radio Transcripts that this was the only area within visual range of the Itasca that had any cloud cover, and would be the most likely place for Earhart to be, as she could not see either the island or Itasca." 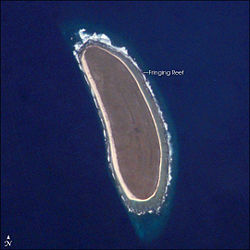 The Waitt Institute for Discovery has an excellent video on this page that demonstrates how difficult it can be to spot Howland Island from the air.

Anne Pellegrino had a hard time finding Howland in her 1967 re-enactment of Earhart's flight plan; the weather conditions Pellegrino encountered certainly added to the difficulty.

Robert M. Stanley, who participated in the air search for AE, flying off the USS Lexington in July 1937, gave a similar report:

"During the week, during our search to the North and West of Howland Island, the weather followed an unvarying pattern. A strong east wind created high waves and white caps. Frequent rain showers of locally great intensity dotted the horizon in all directions. The sea was flecked with white caps and wind steaks, effectively masking any debris, had there been any. The rain showers were too dense to fly through, but were small enough they could be flown around. Morning, noon, and night, the weather pattern never varied. It was not stormy; merely the normal weather pattern of that part of the Pacific. ... We passed within 5 miles of Howland, but none of the search party ever saw the Island, as we were not searching by air that closely; others had already done so, and our assignment lay further northwest. Nevertheless, even as close as five miles, the island could not be seen from the bridge of the USS Lexington; it was probably hidden by a rain shower" (Earhart’s Flight into Yesterday, p. 60).