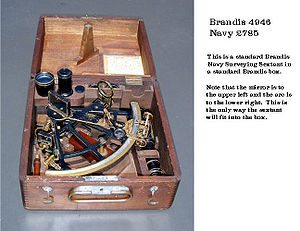 According to Peter Ifland, an inverting (or erecting) eyepiece is an attachment to a sextant that is often useful in taking sightings from an aircraft.

"An inverting eyepiece would be at least an inch or so of metal & glass. The eyepiece is used to flip the sextant image so it is more 'natural' to look at (a sextant as you know will show the image upside down). An experienced navigator probably wouldn't bother using it" (Ross Devitt, December 14, 1999 Forum).

From the material in the bones file, it seems as though Gallagher did not see the inverting eyepiece himself but made an educated guess about what was found and (allegedly) discarded.

Telegram (not numbered) – circled 13. Gallagher to Vaskess.
NOTE: The version of this telegram in the “Tarawa File” (Gallagher’s copies) differs slightly from the version in the W.P.H.C. file. The copy of the telegram in Gallagher's file is the only telegram in the file that is not on a standard government telegram form but is, instead, simply typed on a piece of paper. It is also the only document in that file with initials and numbers written at the bottom. They are appear to be “PAL 9/2.” Gallagher’s copy is addressed from “The Officer-in-Charge, P.I.S.S., Gardner Island” to “The Secretary, Western Pacific High Commission, Suva.” The WPHC copy is addressed from “Acting Administrative Officer, Gardner Island” (an incorrect title) to “Secretary, Western Pacific High Commission”
The transcript of Gallagher’s copy is:

Confidential. Your telegram No. 2, no sextant was found. Only part discovered was thrown away by finder but was probably part of an inverting eyepiece. Gallagher.

The transcript of the W.P.H.C. copy says:

Confidential. Your telegram No. 2, no sextant was found. Only part discovered was thrown away by finder but was probably part of thread of inverted eyepiece. Gallagher.