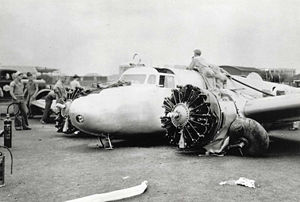 Amelia's first round-the-world flight attempt ended on March 20, 1937, with a ground-loop while trying to take off from Hawaii for Howland Island.

The runway was not surfaced with linked steel plates, also known as "pierced steel plates" (PSP); Marsden Matting was not put into production until 1941.

The "landing mat" referred to in the documents associated with the Naval Board of Officers was two layers of stone intended to promote rapid drainage: "At Luke Field, Hawaii, workmen spread a six-inch layer of crushed rock, rolled it, oiled it, and covered it with fine stone. Reports from Hawaii within a few months told of weeds poking through the 'new and widely-advertised landing mat.' At Moffet Field, California, putting together a mat entailed hauling in rock, stabilizing it with emulsified asphalt, and finishing it with a coat of asphalt and sand. An asphalt runway built in 1938 permitted flying at Nichols Field, Philiippine Islands, regardless of the condition of the rest of the field" [1]

"During the night it showered heavily."[2] The attempted takeoff was shortly after 5:40 AM, so the sun might not have had time to dry the runway. It should be noted, however, that the review board judged that "the nature and condition of the Luke Field landing mat had no bearing on the causes resulting in the crash."[3]

It is ironic that Earhart tried to reach Howland twice and failed both times.

The repercussions of the crash probably arguably set up the first links in the accident chain resulting in the loss of the aircraft and all souls on board on July 2, 1937.

One of the things I love about this job is that the most amazing people sometimes just call on the phone out of the blue. Usually it's somebody from the bank asking about the overdue payment but once in a while it's a guy like Gerald V. Berger of Seattle who called yesterday morning to tell me that he wanted to make some corrections to the book he had just read called "Amelia Earhart - The Mystery Solved." I explained that I had not written the book but Mr. Berger, who is 83, said that was okay. His son had found our website on the internet and so he had called me. He also wanted to know if I would like to have some photos he had taken of Amelia Earhart's airplane when it was wrecked on Ford island. I said, "Sure, you mean at Luke Field?"

"Well, that's what the Army called it. We shared the runway with them. To us it was Fleet Air Base, Ford Island."

"Yup, aircraft mechanic with VJ6. I also drove the crash truck. We had the only crash truck on the field."

"Did you drive the crash truck that morning - the morning she wrecked the airplane?"

"Sure did. Saw the whole thing. We were following down the runway behind her just in case. Looked to me like she tried to pull if off too soon and it settled back down crooked. The right wing dipped, then the right gear folded and that was it."

"So you were on the scene right away."

"First one there. I ran up on the right wing and leaned across to get the hatch open. Had an awful time. There was this loop antenna and you had to turn it to get it out of the way before you could open the hatch. About that time two Army guys got up on the left wing and we got the hatch open. That's when we saw she was unconscious."

"Yeah, that's where the guy who wrote the book has it wrong."

The Longs say: "With deliberate calm Earhart shut off the ignition and master switches and opened the overhead hatch. She stood up on the pilot's seat with her head and shoulders out of the cockpit. The fire truck was right behind her. She watched as it pulled up on the left of the plane" (p. 101).

"Are you sure she was unconscious? What did she look like?"

"She was slumped over sort of down to the right. I guess Newman (sic) must have reached over and released the hatch. He was fine but she was real groggy. We got her up and out of there and standing on the wing and she came around."

The Longs say: "Lieutenant Arnold and Chris Holmes arrived at the plane just as Earhart exited from the cockpit. Chris helped her as she came down off the left wing. Amelia asked, "What happened?"

"Newman was pretty uptight about his charts and insisted on getting them out of the airplane. We were all worried because there was gas all over the ground and puddling up where the hot bottom cylinders had dug gouges in the macadam and a bunch of sailors were wanting to come help and they were smoking."

"How many people were in the plane?"

"Amelia and Newman were up front and there was another fella in the back. They had a bunch of extra fuel tanks in the cabin and he was back behind them. I don't think I talked to him at all. I had a little Brownie camera - servicemen weren't supposed to have cameras in those days, but I did anyway - and I started snapping pictures. Later that day I took the film in to town to have it developed. When I went back to pick it up I found out that the guy who owned the store had sold one of my photos to the newspaper. I was real mad so he gave me $20."

The Army's official report on the crash contains the following description
"The fire truck had followed along the side of the mat during the take-off and reached the scene within a few seconds as did the observers nearest the crash. There was no fire. Miss Earhart and her crew emerged unhurt."

Major Phillips Melville, Operations Officer, Luke Field
"The Luke Field crash truck had followed the the airplane on the take-off and was on the scene immediately. The persons nearest the scene reached it within a few seconds. The undersigned leaped into an automobile and hurried to the scene, arriving first as Miss Earhart and her crew emerged unhurt."

1st Lieutenant Donald D. Arnold, Air Corps, Depot Engineering Officer, Luke Field
"I grabbed Mr. Chris Holmes by the arm and together we sped to the scene of the crash in my car. Mrs. Putnam was standing upright in the cockpit but Mr. Noonan and Mr. Manning had not yet alighted. Mr. Holmes proceeded to assist Mrs. Putnam and the crowd formed immediately."

Fred D. Wood, Civilian Employee, Hawaiian Air Depot
"By the time the airplane had stopped doing the ground loop, the Luke Field fire department was at the plane prepared to put out any possible fire. The mechanics from the Hawaiian Air Depot who were standing along the edge of the landing mat ran across the run-way to the plane with fighters. Mr. Mantz with a fire fighter accompanied these mechanics. Miss Earhart was standing up in the cockpit soon after the plane had stopped turning, and a short time after that, crawled out of the cockpit and went to the rear cabin door."

This is a classic conflicting eyewitness situation, even among the people who provided written statements at the time. Gerald Berger - like Leo Bellarts, Frank Stewart, and Harry Balfour - had some first-hand involvement with an event which was to become legendary. The story each of them tells includes a dramatic element that is unsupported by the written record.

Gerald and I talked for quite a while. He told me that a couple of years later he was assigned to the seaplane tender USS Pelican. The ship had a Grumman J2-F "Duck" on the fantail which they swung out and plopped into the water with a crane. They were sent way down to South Pacific to take aerial photos of a whole bunch of islands.

I said, "Yeah, you were supporting the USS Bushnell’s survey."

"Yes!! How did you know that? I have photos of the Bushnell."

"Oh, we've tried to study up on things that happened in that area. Did you take any photos of the islands yourself?"

"No. I was the mechanic. I generally didn't ride in the plane except for maintenance tests."

"Do you remember any of the islands you visited?"

"Sure. I remember that when we stopped at Hull Island about 20 men went ashore in the launch and spread out and did a search."

"A search for what?"

"For her plane of course. Didn't find anything though."

"So you guys were still thinking about Earhart?"

"Oh yeah. A lot of people were sure that she had made it to one of those islands."

"Do you remember visiting Gardner?

"Thanks. I'd love to see it. We have a copy of the aerial photo mosaic the Duck took that day. That was April 30, 1939. Do you remember if anybody went ashore there?"

The Pelican’s deck log does not indicate that anyone went ashore but Jack Petro, the foreman on Gardner, and a few of the workers did visit the ship for a few hours.

Although Mr. Berger's recollections contain no great revelations, it's always a privilege and a little bit spooky to speak with someone who "was there."

I did not tape our conversation and the reconstruction of our conversation related above is a paraphrase done from notes I took as we were speaking. The information and the tone are accurately conveyed if not necessarily the exact words. There was much more to the conversation. I've reproduced only the parts that are relevant to our investigation.

When the Navy emptied the aircraft to prepare it to be shipped home, it produced a detailed inventory of everything found on board.