From TIGHAR
(Redirected from Bendictine Bottle found on Nikumaroro)
Jump to: navigation, search 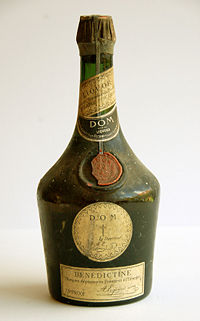 Benedictine D.O.M., ca 1930's, with its unique bottle shape. It is most likely representative of the bottle found on Gardner Island. (Courtesy: Oxygenee, Ltd.)

When the skull was found and buried in April, 1940, it seems that there was a bottle nearby. Teng Koata apparently took the bottle with him to Tarawa before Gallagher began the "thorough search" suggested by his superiors. Although the bottle was recovered from Koata, it apparently was not shipped to Suva with the other things collected on Niku.

Telegram from Gallagher to the Acting Administrative Officer, Central Gilbert Islands District, Tarawa. Transcript
September 23, 1940
Please obtain from Koata (Native Magistrate Gardner on way to Central Hospital) a certain bottle alleged to have been found near skull discovered on Gardner Island. Grateful you retain bottle in safe place for present and ask Koata not to talk about skull which is just possibly that of Amelia Earhardt. [sic]

Gallagher in a telegram on October 6, 1940, says that there was "no indication of contents" found in the bottle, if any.

Floyd Kilts was told that "beside the body was a cognac bottle with fresh water in it for drinking."