Floyd Kilts' Stories about the Bones 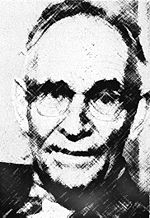 Floyd C. Kilts (17 August 1891 - 11 September 1964) was born in New York, and later moved to California where he lived for 44 years--32 years in San Diego--employed by the State of California for 40 years of that time as a construction engineer. Kilts saw service in WWI, and again during WWII rated as a Chief Carpenter’s Mate in the U.S. Coast Guard. In 1946 his Coast Guard unit was deployed to Gardner Island (Nikumaroro) to dismantle the USCG LORAN Station. Kilts, in his mid fifties at this time, had a conversation with a native colonist on the island who, through the help of an interpreter, passed on to him lore of bones found on Nikumaroro—an anecdotal tale of skeletal remains found and thought to be those of the lost aviatrix Amelia Earhart. (See 3 Aug 1999 posting by Ric)[1]

It was not until 1960 that Kilts, during a period of convalescence, retold the story to San Diego based free-lance reporter Lew Scarr. The San Diego Evening Tribune editor, Leo Bowler, wrote to the British Colonial Secretary on Canton Island in an attempt to verify his story learning that officials had no knowledge of such an event but thought it was highly unlikely. The story, however, was published in the July 21, 1960 edition of the Tribune. [2]

In 1961 KCBS reporter Fred Goerner picked up a shortened AP dispatch of Kilts’ story, and briefly mentioned it in his 1966 book, The Search for Amelia Earhart. A 1989 letter from Goerner to TIGHAR member Rob Gerth, outlined Goerner’s later research on the story which explained it away as being partially true events with erroneous conclusions. [3]

While researching the Kiribati National Archives in Tarawa in 1997, TIGHAR member Peter MacQuerie discovered a formerly secret file labeled “Discovery of Human Remains on Gardner Island” which contained 15 official telegrams and one letter regarding the discovery of a partial skeleton on Gardner Island in 1940—correspondence which corroborated the central theme of the anecdote which Floyd Kilts was told in 1946. [4]

Gardner Island is a five-mile hyphen of coral punctuating a million square miles of nowhere and nothing in the Central Pacific.

If a San Diego man is right, it is where Amelia Earhart crashed and died 23 years ago. The water slapping the short, sharp Gardner shoreline is as warm as your bath and as blue as your baby’s eyes.

At low tide the smoothest coral in the world is exposed for 200 yards. From the air it looks as if you could dry your nets there, fly your kite, or, alas, land your plane.

Actually, this smoothest coral is slashed with canyons six to 10 feet wide and 40 to 100 feet deep. At the ends of the 200 yards, the hard beach drops deceptively, 100 feet or more at one spot.

A plane attempting a landing there would be dashed to pieces.

And in the warm, blue water slapping the Gardner shore, Floyd Kilts says, Amelia Earhart’s airplane, the Flying Laboratory, lies in a crust of shells.

Islands Base for Coast Guard Unit

Kilts, 68, of 3615 Oleander Dr., is on leave from his job with the state Department of Veterans Affairs after suffering a heart attack. During World War II he was a chief carpenter in the Coast Guard for four years.

He was stationed on 15 islands in the Pacific installing and dismantling loran stations (navigational aids). One of the 15 was Gardner.

That was March, 1946, nine years after the world’s greatest woman pilot and her navigator, Fred Noonan, flew the twin-engine Lockheed Flying Laboratory from here to eternity.

No satisfactory, documented explanation of the disappearance has been accepted. Even after the navy officially listed Miss Earhart and Noonan as dead, there was the nagging feeling among some that the tousle-haired aviator lived.

Recently a story that she was captured and executed by the Japanese was scotched. Kilts said the story was impossible anyway because it held that Miss Earhart turned up on Saipan, a 90-degree error from take-off at New Guinea to Miss Earhart’s announced destination to Howland Island, more than 2,000 miles away.

But Gardner is on roughly the same longitude as Howland and only 380 miles south. The final authentic message from the Flying Laboratory said Miss Earhart was running north and south, perhaps on the line between Howland and Gardner.

Kilts knows this bit of reasoning is hardly enough, but there is more. Here in his words is the rest of the story:

“A native tried to tell me about it. But I couldn’t understand all of it so I got an interpreter. It seems that in the latter part of 1938 there were 23 island people, all men, and an Irish magistrate planting coconut trees on Gardner for the government of New Zealand. Gallagher was actually working for the British Western Pacific High Commission.

“They were about through and the native was walking along one end of the island. There in the brush about five feet from the shoreline he saw a skeleton.

“What attracted him to it was the shoes. Women’s shoes, American kind. No native wears shoes. Couldn’t if they wanted to—feet too spread out and flat. The shoes were size nine narrow. Beside the body was a cognac bottle with fresh water in it for drinking.

“The island doctor said the skeleton was that of a woman. And there were no native women on the island then. Farther down the beach he found a man’s skull, but nothing else.

“The magistrate was a young Irishman who got excited when he saw the bone. He thought of Amelia Earhart right away. He put the bones in a gunnysack and with the native doctor and three other natives in a 22-foot, four-oared boat started for Suva, Fiji, 887 nautical miles away.

“The magistrate was anxious to get the news to the world. But on the way the Irishman came down with pneumonia. When only about 24 hours out of Suva he died.

“The natives are superstitious as the devil and the next night after the young fellow died they threw the gunnysack full of bones overboard, scared of the spirits. And that was that.”

This same account was related by the doctor to New Zealand officials.

Kilts knows that there are those who never will believe absolutely that the skeleton was that of Amelia Earhart, not without a dental identification or something. But Kilts believes it.

He is sure that Miss Earhart crashed on the coral trap of the Gardner beach and crawled into the brush and died.

He thinks that Miss Earhart thought that Gardner was Howland. Or even if she realized it wasn’t Howland she tried to bring the fuel-empty Flying Laboratory down at any old port in a storm—in this case, the treacherous Gardner Island.

So, there you are. Kilts knows there have been many Amelia Earhart theories and may be many more.

Next month he will fly to the Philippines to visit his daughter and, perhaps, stop off at Gardner in the middle of nowhere and nothing to hunt for an airplane and do a little theory proving of his own.

(AP) Another theory of what may have happened to Amelia Earhart was offered today by a former United States coastguardman.

He said she and her navigator, Fred Noonan, may have met death on Gardner Island in their attempted trans-Pacific flight 23 years ago.

Floyd Kilts, 68, now on leave from a state department of veterans affairs job, went to Gardner Island on a Coast Guard mission during World War II.

He said a native told him that in the latter part of 1938 the skeleton of a woman and the skull of a man were found on the shore of the island.

A white planter believed the skeleton might be Miss Earhart's and started to Suva, Fiji Islands, with it, Kilts said he was told. But he died of pneumonia on the way and the superstitious native boatmen threw the skeleton overboard.

Kilts pointed out that isolated Gardner Island was on the route Miss Earhart was believed to have taken from New Guinea.