This is Tom King's user page. Tom King is TIGHAR's senior archaeologist and a member of the board of directors. He can be contacted at tfking106@aol.com 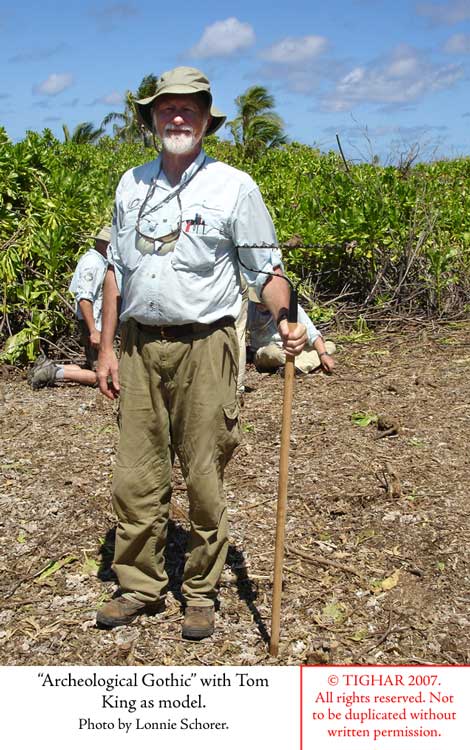 Tom has a PhD from the University of California, Riverside. Off and on from the late 1950s until the early 1970s, he worked in California archaeology, and was one of the founders of the Society for California Archaeology. He carried out major fieldwork projects in northwestern California and the Sierra Nevada foothills. In the 70s he worked for the New York Archaeological Council, the National Park Service, and as Consultant in Archaeology and Historic Preservation to the High Commissioner of the Trust Territory of the Pacific Islands; in the last role he helped organize historic preservation programs in what are now the Commonwealth of the Northern Mariana Islands, the Republic of Palau, the Federated States of Micronesia, and the Republic of the Marshall Islands. From 1979 until 1989 he was a senior official in the Advisory Council on Historic Preservation in Washington DC; the Council advises the president and congress of the United States on historic preservation matters and -- most critically -- oversees how federal agencies deal with the effects of their plans and programs on historic properties under Section 106 of the National Historic Preservation Act. In 1989 he left government after policy disputes with the administration, and went into private practice. Since then he has worked extensively with the U.S. General Services Administration, the Department of Defense, the Department of Veterans Affairs, a large number of Indian tribes, and many other public and private sector clients. He has also written extensively, and blogs at crmplus.blogspot.com. His major publications include: