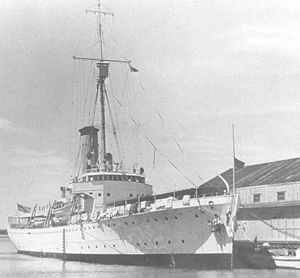 U.S. Coast Guard Lakes-class cutter (1929-1941). Not to be confused with the USS Itasca that served in the Civil War.

Commander Thompson's report (he was captain of the Itasca but his rank was Commander) to the commandant of the 14th Naval Distict is dated 29 July 1937 and he does say that he "Commenced laying heavy smoke at daylight." However, in his much more detailed report to the Commander of the Coast Guard's San Francisco Division (his own boss) he clearly gives the impression that, at the time of Earhart's presumed closest approach to Howland (between 8 and 9 a.m.) "Itasca was laying down smoke screen stretching for ten miles. Smoke remained concentrated and did not thin out greatly" (page 43 of Radio Transcripts Earhart Flight). That impression is almost certainly false and misleading.

This press release was sent by a reporter [James Christian Kamakaiwi]on Howland Island:

WE WERE UP BEFORE DAYBREAK THIS MORNING

WE WERE EXCITED AND I WAS PARTICULARLY EAGER

THE SUN WAS HOT ON THE WHITE CORAL

HOPES WERE RAISED SEVERAL TIMES BUT NO AMELIA

EIGHT THIRTY AND THE MINUTES DRAGGED

TO THE NORTHWEST WAS A BIG BANK OF CLOUDS

WHAT A GRAND BACKGROUND THAT WOULD MAKE

THE RECEIVER SHOUTED TO US AMELIA BELIEVED DOWN

ALL SHORE PARTIES RETURN TO SHIP

IT DIDNT SEEM REAL MEN WERE RUNNING TO THE HOUSE

BOATS PUT OFF FROM ITASCA

NO ONE WAS LAUGHING

SOON SHE WAS DISAPPEARING OVER THE HORIZON

I HOPE WILL ALL MY HEART THEY FIND HER

Note that the reporter is referencing HST (Hawaiian Standard Time) which was an hour later than the time zone Itasca was using. This agrees with the ship's deck log that has the Itasca begin laying smoke at 06:14 local time. The reference to a DF bearing that put the plane northwest of Howland is interesting. The radio log makes it clear that no such bearing was taken. The ship's deck log also specifies that Itasca left its assigned station at Howland Island at 10:40 local time to begin searching to the northwest where Thompson had apparently convinced himself that the plane was down.