Landing on a Reef: A Case Study

Nine months prior to the disappearance of Amelia Earhart’s Lockheed Electra, the General Aircraft Monospar Croydon ST-18—a machine of the same class—powered by twin Pratt and Whitney Wasp Junior engines and having a10 passenger capacity, strayed off course and landed on a reef in the Timor Sea 462 miles West of Darwin. [1] The crew did not know the name of the reef nor its location. A near analogue of TIGHAR’s Nikumaroro Hypothesis, startling similarities abound between the 7 September 1936 loss of the only Monospar Croydon ever built, and the posited Nikumaroro landing.

Flight of the Monospar Croydon ST-18

What was publicly announced as a personal flight became a promotional tour to demonstrate a competitively performing, economical new aircraft built on the “American formula”. The Monospar Croydon was a low wing, retractable gear machine with variable pitch propellers, stressed skin construction, and trailing edge flaps. The flight from London to Melbourne offered an opportunity to best the existing England to Australia record; however, time taken for necessary repairs due to a hard landing caused the attempt to fail. A second attempt was planned for the return flight to England. The pilot of the £14,000 Monospar Croydon was Harold “Tim” Wood, assisted by the craft’s designer, Frederick F. Crocombe. Also on the crew were engineer, L. Davies and Wireless operator Charles Gilroy.[2]

On the flight from Singapore to Darwin, Australia, the Croydon aircraft experienced varying compass deviations reaching a maximum in the Timor Sea area of around 15 degrees. [3] After arriving at Melbourne, however, the compass appeared to be correct and no instrument check or maintenance was performed. Though the crew anticipated a repeat of the compass deviations on their return flight, none materialized by the time they reached Darwin. Accordingly, the craft set out on a departure course for Koepang with no deviation adjustment applied to the compass heading. They were confident that the Darwin Royal Australian Air Force Base Directional Wireless Station would provide reliable bearings should a compass problem recur.

Departing Darwin before first light, the Croydon was established on a magnetic heading of 282°, with 4°E variation and 1° wind drift correction for the planned 2 ½ hour leg across the Timor Sea to Koepang. Twenty-five minutes out, a directional bearing was received from the Darwin station showing the aircraft was north of course. A heading adjustment was made to the south. Each of three successive bearings continued to show the craft north of course, and the heading was adjusted further to the south. The crew now suspected they were once again experiencing an erratic compass. Querying Darwin regarding the accuracy of the bearings, the crew was reassured that the bearings were “first class”, that is, within +/- 1°. As they neared their estimated time of arrival for Koepang, radio contact with Darwin was lost. When land did not appear at their estimated arrival time, the plane descended to 3000 feet below the clouds for better visibility. They maintained their present heading and at 0800 a reef was sighted. Thinking this was an indication of nearby land, they used the reef as a reference and reconnoitered in each direction, sighting three reefs in a north-south alignment, and a fishing boat near the reefs. Flying low over the boat, they “dropped a can with a note, asking for the directions to Koepang”, but there was no response. Now, with only an hour’s fuel left, two options presented themselves. Go to the north, hoping land would be within their 180 mile range (with the possibility of having to ditch in the sea), or make a landing on what appeared to be a suitable stretch of the reef. Sighting another boat fishing in the lagoon, the option to land on the reef was selected.

Landing On the Reef 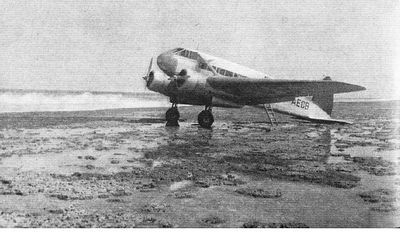 The only General Aircraft Monospar Croydon ST-18 ever built is shown after landing on Seringapatam Reef in the Timor Sea. While taxiing to a higher dry area on the reef, the tail wheel yoke fractured on the rough coral, otherwise the plane was undamaged. (Image Courtesy of Flightglobal)
Circling to find the best location to set the machine down, the pilot made a “touch and go” landing to confirm the suitability of the reef. It appeared firm. On a second flat approach a landing was successfully made with no damage to the aircraft. Bringing in fuel for a subsequent take-off from the reef even seemed a possibility. When the pilot elected to taxi to a higher dry area of the reef, the aircraft tail wheel fork fractured from the rough surface and dropped the tail to the ground. The neap tide was now at low water, but it was rising rapidly. (That day the tide would rise to three feet; in a few weeks it would rise to 14 feet, enough to submerge the aircraft, and during the spring tide, it would reach 20 feet, with heavy swells from the northwest monsoon possibly breaking up the aircraft.) [4] The crew’s first action after landing was to run out the trailing wire antenna supported by two collapsible boat oars. Wireless communication was attempted and though they heard both Darwin and Surabaya, contact with neither could be made. The port engine with a generator was started in order to recharge the batteries run low by the radios. After two hours, it was realized that contact was not possible. Personal gear and four day’s rations and water were loaded into their collapsible boat. 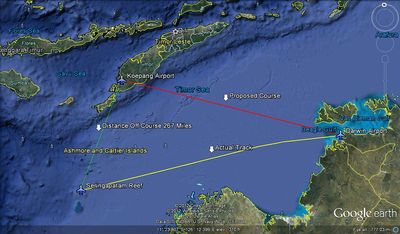 Proposed route from Darwin to Koepang, and the actual track of the Monospar Croydon after navigating with a faulty compass and erroneous night time DF bearings from Darwin. The aircraft landed on Seringapatam Reef 267 miles south of its intended destination.
The Maylayan fishing smack fished at Seringapatam Reef only once or twice a year. The boat St. Gambor Boelon, from Boeton in the Celebes, was now fishing in Seringapatam’s lagoon. [5] It was about a mile away from the west side of the reef where the Monospar Croydon landed. After the aircrew got their attention, the boat stood off to await them while they waded and pushed the collapsible boat with their possessions through deep rocky pools “infested with giant clams and occasional small sharks”. [6] Arriving at the boat they found communicating with the fishermen extremely difficult. The only word the fishermen recognized was “Koepang”. It took five hours to convince them to take the aircrew aboard the boat, and then interrupt their fishing to transport them to Koepang. After boarding the fishing boat, the fishermen were given a pair of binoculars. It was a long 55 hours on the cramped, malodorous boat with rotting fish, surviving on short rations when they spotted the SS Nimoda, a British cargo steamer 100 miles from Seringapatam Reef. Captain Sadlier, Master of the Nimoda, brought his vessel closer and asked if he could be of service. “And how!” was the response. With the Croydon’s crew transferred aboard the Nimoda bound for Durban, the “exhausted, unshaven, hungry men” gave their first thoughts “to get out radio messages to their wives and next to notify their company of the plight of their machine”. [7] Australian authorities, having learned of the overdue Croydon, dispatched a patrol launch to search an area 70 miles from Koepang, the presumed position of the aircraft when contact was lost. Shipping was advised to be on watch, and the Dutch sent two flying boats to the area to begin searching. A message from the Nimoda was dispatched to authorities stating that they had picked up the aircrew from a fishing boat that had rescued them near Seringapatam Reef. On the Nimoda, the aircrew learned that they had ended up 267 miles south of their destination, and that both their compass and the Darwin radio bearings were in error.

The Australian Air Accidents Investigation Committee released their findings in December following the 7 September 1936 incident. The report found that the plane’s crew was “guilty of negligence on the ground that the machine’s compass had shown a ten degree error on the flight to Australia, but no action was taken to correct it; that the personnel of the Direction Finding Station at Darwin, knowing the limitations of the Bellini-Tose system should not have consented to give bearings during hours of darkness; that the pilot of the plane, who was a qualified navigator and wireless operator, should have been well acquainted with the direction finding instructions relating to sunrise, sunset and night effects, and should not have relied on the signals for his direction.” [8]

Landing on the Reef