From TIGHAR
(Redirected from Gatty)
Jump to: navigation, search

"You guys are nutty. It's pretty useless to try to figure out what happened. But whenever I call someone eccentric, my friends say 'Look who's talking!'" 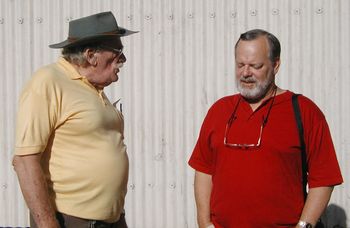 Ron Gatty was interviewed by Roger Kelley and Marty Moleski as part of the 2003 expedition to Fiji.

RG was once out in a small boat in a large bay where a British ship and a German ship were playing cat-and-mouse with an island between them. RG, age eleven, was just teaching himself Morse code. He decided to practice by pointing a 5-cell flashlight at the British ship. Shortly after he began sending the message, "Hello! My name is Ron and I am learning code," every gun and searchlight on the ship swung their way. The radioman on their boat, called Sparks (of course), grabbed the flashlight and poured out a stream of apologies. For his childish behavior, RG earned an invitation to tea from the British captain and a beating from his father.

Gatty went to sea at age 16 in a surplus Navy LCT that shouldn't have gone into the open ocean. They had engine trouble and were laid up in Canton for a month or so while the engines were repaired. The vessel was used as a base for diving and tuna fishing for five years. Both businesses failed. His father built the original tuna canning plant on this island. It was during this time that Ron learned "bush engineer's navigation."

When Gatty was 17-19 years old, there were only five or six sailing boats in Fiji. It was a small community. Captain Stan Brown and he were the only European skippers. Ron kept a carbine on board; Stan packed a .45 on his hip. Most of the other skippers were kai-loma (part European).

Castaway on a tropical island

Gatty and a crew of four or five men were stranded on a small atoll for a while because they ran out of gas. The man who checked the level in the tanks didn't make allowance for the rocking of the boat. They survived because they had one of the best divers in Fiji aboard. He was able to swim underwater for six minutes and caught all the fish they needed.

RG caught birds to eat when he was stuck on Bird Island with his crew mates. He would sit in trees until the birds came to roost, and he would always catch a few. He kept them in a cage. But the diver let them all go. His Catholic faith was not as strong as his tribal tradition that the birds were sacred.

In the end, they paddled their 26-foot launch to the main island, which exhausted them. If they had missed the island, it would have been another 500 miles of hard going to get to the next island.

No one searched for them because they had no particular itinerary. Gatty would be off with the boat for up to six months at a time. The only thing his father said to him on his return was, "You need a haircut."

Remarks on Earhart and Noonan

Met Amelia Earhart at least once. "All I remember of Amelia is a smile--charming and open."

Gatty also met Fred Noonan, who was a good friend of Harold Gatty. He never saw Fred out of control due to drinking. Fred and his father enjoyed themselves. Drinking was open and accepted. Noonan was a warm and competent man. Of course, Gatty was only 8 when Fred and Amelia disappeared. Clearly this recollection needs to be taken with a grain of salt. A young boy may not have stayed up late at night with the men.

Something has been troubling me, on my mind, over these years. Not sure if I spoke to you about my father's advice to me, in boat or aeroplane, you should determine exactly your latitude and latitude of island you are aiming for. You should NOT set your heading directly to that island, but to one side. Then you will know whether to search to right or to left when you reach latitude of the island. He told me this was the tactic of old old sailing ships (when they knew in advance the latitude of the island.) It has troubled me whether Noonan knew NOT to aim directly for the desired island.

The advice makes good sense to me. Latitude is easy, longitude even in my day, not so easy. (Harold published a star map with all the declinations, so I could always know my latitude, even with no sextant at hand.) Chronometers wound by hand, delicate instruments in a rough world, long time at sea, not so accurate, for longitude. We had to calculate their daily gain or loss of seconds by some means. If radio is not working, you may be in trouble. Tiny islands are tiny, and the Pacific is unimaginably gigantically huge, and vast. Can be terrifying, and very humbling.

My guess is that Noonan did not know or follow this advice, and ended up with the 'plane out of petrol, going down in the sea.

Reminds me that I once asked Harold why he and Wiley Post carried no parachutes when they flew around the world in 1931. He explained that weight was one factor. He also said there was no Air/Sea Rescue service in those days, and few ships to find them and pick them up. Or over the vast expanses of Russia or Canada, they would at best land in very isolated territory. Made sense. (Harold was a great aviator/navigator, but a lousy daddy!) Still, I learned some things. Survival. That is not bad. I have survived a lot in my days. A lot of it, I think, has been Lady Luck. Some of my friends say a Higher Power has wanted to keep me around!

RG is doubtful that the bones would have been taken to Honiara. It is an "outpost of nothing." The social problems there are a "Melanesian mess."

Gatty was close to Isaac/Verrier, especially in his last years. He was a good doctor--and intelligent, "which is not too common in Fiji."

Gatty and Isaac/Verrier had a common hobby. Gatty is writing a massive tribal history of the other large island, Vanua Levu. It is 2000 pages in manuscript on his computer. It may turn out to be eight books, with one or two provinces in each book. Gatty thinks it will be useful to people trying to trace their roots (which is important for establishing native rights).

When RG was working the the states, he would return frequently to Fiji to search for plants for Johnson and Johnson. He would see Verrier on those trips. Verrier had an attic full of "native stuff." He was quite a collector.

RG has been working on his new vanilla extract for seven years. He purchases ethyl alcohol tax free at about 70 cents Fijian per liter. This is the same stuff that is used to make vodka or white rum. He uses dark rum for the vanilla extract.

He feeds 200 households from his spice business. There is no graft in his company, which is rare in Fiji. There is no easy way for the country folk to make money. The young come into the cities because there are no jobs in the villages, and that leads to trouble. He hopes to be able to expand his business to support 1000 families. The government is supporting him with some small grants.

Gatty's farm community is multi-cultural and multi-religious. He himself is a non-theist.

The "dreadful Fr. Barr" stole some of his land for a reform school of some kind. Some of the boys were rough. Barr tried to ply RG with liquor to persuade him to donate the land.

Like Candide, RG intends to "cultivate my own little garden." He has a number of young women working in his company--his own "spice girls." They have dance nights and festivities on the farm. Alcohol is prohibited. RG doesn't care what people do off his land, but he will not allow drinking on the property.

Gatty is a man of strong opinions trenchantly expressed: "The government is nepotic, corrupt and blind to truth." Fr. Bransfield: "Ron Gatty is a wonderful writer. He took the government to pieces and gotten beaten up for his trouble."

On Wednesday, May 15, 1996, he wrote about the Fijian tribalism and nepotism that protected corrupt public servants from being held accountable: "You see, in Fiji, civil servants quickly learn to go along with the system. Their job is not to rock the boat. That's what we've been doing, goin along with the system. Maybe the time will come when we hold people accountable for their actions."

Within a few days, Gatty's home was attacked. He fired a warning shot. Four police cars and a dozen officers came to take him into custody, while his assailant walked free. The government then informed him that his columns for the Fiji Times was a violation of his work permit, which only gave him permission to act as a spice grower. The government was not appeased by the fact that the columns were written for free. They never said that what Gatty wrote was false--they only said that "you shouldn't write those things."

When RG needs to get around on a Sunday, he dresses up in a coat and tie and parks a Bible prominently on the dashboard in front of him so that he can tell people he is going to Church.

Many people have asked RG to officiate at Muslim and Hindu weddings because they enjoy hearing him speak. He is fluent in Fijian.

No one has asked RG to serve on any boards. "They won't trust me to shut up. I just say what I think." 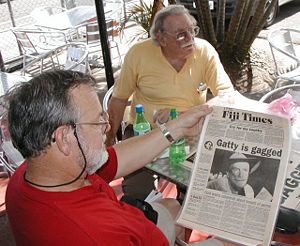 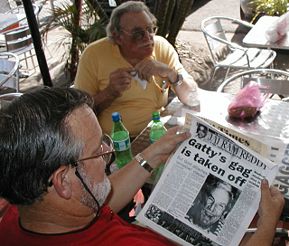 "My Fijian-English Dictionary, encyclopedic actually, is now used in all the Fiji schools. Progress is slow on my nine volume series of books Tribes of Fiji. I publish privately to keep the cost down for locals who are not book-buying types! Life is good. My wife, Janette, authored a book on Père Joachim Bouvet, S.J., the first ambassador from France to Emperor of China, and another book on Beaumarchais--all in French of course."