In the spring of 2003, TIGHAR sent Roger Kelley, a former Marine and retired police officer, and Marty Moleski, a Jesuit priest, to Fiji to follow up on various leads developed in the 1999 search for the bones that had been found on Nikumaroro in 1940. Although TIGHAR had also developed fresh ideas for avenues to explore through the Earhart Forum, Kelley and Moleski's search failed to find any trace of the bones, sextant box, shoe parts, and corks that Gallagher had found on Nikumaroro and sent to Fiji.

The WPHC closed the inquiry into the death of an unknown person on Niku in September of 1941. The last entry in the file reads, "Seen. P.A. ["put away"]." There is no mention in the file of what was done with the bones and other materials that Gallagher had collected. 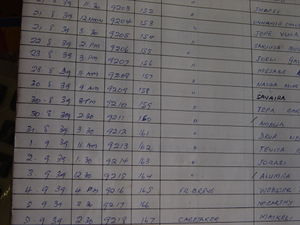 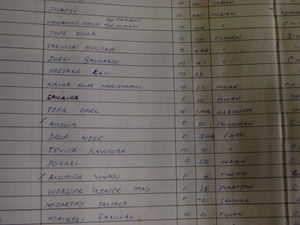 It is conceivable that someone decided to give the castaway of Nikumaroro a decent burial. Roger Kelley tested that idea by examining all of the burial and cremation records in Suva from 1937 to the present.

Comment from Daniel Postellon
Regarding "naming the bones and burying them". We named the (Saxon) skeletons we found during an archaeological dig in Winchester. The names usually had something to do with their characteristics. One that I fondly remember was "Ethelred Unbod" We only found the skull and a few vertebrae, the rest of the skeleton was destroyed when some Victorians dug a big hole on the site a century earlier. It might be worth looking for a "John Doe Gardner" or some similar creative name.

We visited four cemeteries and found hundreds of graves without monuments. Most of the small stones marking the graves have no legible numbers on them. There are hundreds of unmarked depressions in the grounds as well, probably representing older grave sites. We're not likely to find a headstone that says, "Skeleton, Human, Remains of, Found on Gardner Island."

When Kelley and Moleski were preparing for the trip to Fiji, we reviewed notes from the 1999 bones search, which seemed to suggest that there were boxes in the garage. Our interpretation of the note suggested the picture of boxes containing interesting papers and maybe even some old bones. In retrospect, it seems that they may have seen cardboard boxes flattened on the floor, perhaps to catch oil drips from a car parked there or else some other form of garbage. The garage does not have any hiding places where a box of bones could rest unmolested for sixty years or more.

At approximately 13:30 hrs, I located the Colonial War Memorial Hospital, Waimanu Road, Suva. Telephone 331-3444. I explored areas open to the public and took photographs of the exterior of the hospital and the hospital grounds.

I discovered sealed tunnels which lead into the hill under the Maternity Ward on Extension Street. The tunnels are sealed with concrete and have foliage and residue over and around the entrance. There is no evidence of the purpose the tunnels served or how deep into the hill the tunnels penetrate. I photographed the tunnel entrances and street scene.

I also located Hoodless House, on Brown Street, directly behind CWMH. Directly across the street from Hoodless House are two garages built into the side of the hill. The two garages are joined by a common center wall and are covered with a concrete pad, complete with old pillars and railings on top. There are chairs on top of the pad. Both garage doors were standing open when I approached, revealing their interiors and contents.

The garage on the right is clean and contains no material of any kind. Bare concrete from wall to wall. The garage on the left is empty with a small amount of trash and dirt on the floor. I checked the debris on the floor for any item which may aid in our investigation and found nothing. I did find one page from a newspaper dated July 16, 2002.

There were no objects or material of any apparent value in either garage.

I photographed the street scene, the front of Hoodless House, and the exterior and interior of the two garages.

Discussion of the possibilities

What if Hoodless kept the bones?

What if the bones stayed at the Fiji School of Medicine?

Were the bones buried or cremated?

Were the bones returned to the WPHC?

Why is there no record of disposition of the Niku materials?

Hoodless had custody only of the kanawa box and the bones. He could not have discarded the sextant box, shoe parts, or corks even if he tried.

Moleski: After reading the files in the National Archives of Fiji, I understand what others have said: it seems inconceivable that the British would have let the disposition of the material collected on Niku remain unrecorded. It seems that there has to be a record somewhere of what someone decided to do with the material. Even if someone decided that it was all worthless and should be burned, the standard-issue British bureaucrat would record that judgment for posterity. We just don't know where that record is--if it exists.

To dispose of any of the material without a note would be dereliction of duty.

Guess: the bones file and the material became separated

There was also a time of confusion when a new numbering system was imposed on the filing system. But it would be highly unlike Vaskess not to find the old file and make a note in it if he was the one who decided to get rid of the Niku material.

Why is the death of the Niku castaway not in someone's Cold Case Files?

Was there ever a coroner's inquest into the death of the castaway?

Have people lied to us about what they know?

Moleski: I don't think we have to presume any conspiracy to keep the bones story quiet. The people who had the stuff did the best they could with colonial resources. Once Hoodless judged that the remains were from a male and other examiners found no significance in the sextant box, shoe parts, or corks, the case just became mundane. Some poor soul died on Niku--one of many unknowns who died in the Pacific over the years. No one bothered to double back and cross-reference later files with earlier ones. "Do not attribute to malice what can be explained by ignorance" (Hanlon's Razor).

Kelley and Moleski experienced the Helpful Witness Syndrome firsthand. This may not be the best name for it, but it describes the enthusiasm that some people have to help solve cases. They strain their minds and imaginations to make suggestions about how an investigation should proceed. They would not be identified as suffering from HWS if any of their leads panned out.

In our case, a man heard Moleski asking questions at the National Archives. He said he remembered a story about a little coffin being found in the DAV Girls School near the South Pacific Commission. He thought the coffin was associated with Hoodless. Our informant was born in 1951. If the event took place in the 1950s, it must have been between 1955 and 1959. He guessed 1957. There was a schoolboy rumor that the doctors were involved in some kind of devil-worship.

That was just the beginning of an apparently endless stream of advice about people to contact. He came to our hotel one night, planning to persuade us to hop in our car and drive around Suva tracking down people who might help us find Amelia. The fact that we had no car put a dent in his plans, but he stayed and talked for as long as we could stand it.

At a guess, the news coverage of Bones I from 1999 probably seeded his "memories" of the little coffin. No other informant confirmed any of the stories he told. It seems highly unlikely that he had any information that would help solve the case.

Summary: Where the bones are not