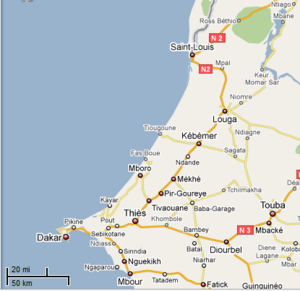 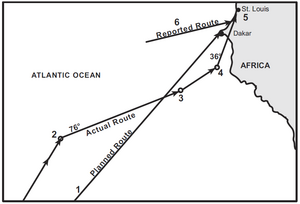 On the tenth leg of the second round-the-world attempt, Earhart and Noonan crossed the Atlantic (7 June). They landed in St. Louis, Senegal, rather than Dakar, Senegal.

The reality: Landing elsewhere was a rational decision

Noonan's letters and his annotated chart of the South Atlantic crossing reveal Earhart's famous turned-the-wrong-way explanation for her landing in St. Louis rather than Dakar to be a complete fabrication.

Ric Gillespie, 16 February 2001 Forum:
How many times do we have to debunk this myth? Earhart's description of the events upon reaching the coast of Africa do not agree at all with Noonan's lines, calculations, and notations on the actual chart used (now in the Purdue collection). Which do you want to believe? The tale AE cooked up for the papers or the story told by the chart?

When they were still about 600 miles out, Noonan had determined that they were well north of course and ordered a heading correction. The next time he obtained a position about three hours later, he discovered that he had overdone it and they were now a bit south of course. He ordered another heading change to start angling back northward. An hour later, at 1800 GMT, as he approached the coast he fixed his position as being a little over 100 miles south and actually east of Dakar (which sits out on a peninsula). About a half hour later, at 18:36 GMT, he passed AE a note that read: "3:36 change to 36 degrees Estimate 79 miles to Dakar from 3:36 PM" (Apparently AE was using local time). AE jotted on the bottom of the note: "What put us north?", apparently referring to the earlier southward correction.

They made landfall at the base of the peninsula several miles southeast of Dakar. Off to the left the city, harbor and airport were obscured by haze in the gathering dusk. It apparently seemed safer to continue up the coast to St. Louis.

None of this can be reconciled with Earhart's description of what happened in her story for the Herald Tribune, repeated later in Last Flight: "When we first sighted the African coast, thick haze prevailed and for some time no position sight had been possible. My navigator indicated we should turn south. Had we done so, a half hour would have brought us to Dakar. But a 'left turn' seemed to me in order and after fifty miles of flying along the coast we found ourselves at St. Louis, Senegal. Once arrived over the airport it was wiser to sit down rather than retrace our track over a strange country with the sudden darkness of the tropics imminent."[2]

Her description of the event is even contradicted by Noonan's note which was reproduced in Last Flight. Clearly he directed her to turn left to 36 degrees, not right as she contends. In his letter to Gene Pallette, written from Dakar two days later, Noonan said of the arrival: "To add to our woes the African coast was enveloped in thick haze, rendering objects invisible at distances over a half mile, when we made the landfall. And our radio was out of order--it would be in such a jam. However, with our usual good luck, if not good guidance, we barged through okay."[3]

Any pilot knows that half mile visibility is no fun when you're trying to find an airport strictly by eyeball and that flying into the sun in dense haze, as they would have been doing had they turned west for Dakar, means being virtually blind. It's hardly surprising that they opted to continue up the coast to St. Louis.

"Earhart took responsibility and apparently invented a story that made the landing at St. Louis look like the result of an error on her part rather than a conscious decision to land at an unapproved airport."[4]

Speculation about Earhart's motivation to lie

"Why Earhart described the incident the way she did in her report to the Herald Tribune (later repeated and embellished in Last Flight) is a bit of a mystery. Amelia Earhart did not always tell the truth to the press when describing her adventures. This appears to be one of those times."[5]

Dakar sits on a peninsula extending out into the Atlantic. The Electra had made landfall south and east of the city. In hazy conditions such as Noonan described, forward visibility while flying toward a setting sun is virtually zero. Turning back toward the ocean to try to find Dakar with no radio, limited fuel, and failing daylight was not an attractive proposition. Finding St. Louis was a simple matter of following the coastline northeastward to where the Senegal River meets the sea.

No one knows why Earhart was so quick to put out a different story, but at least one good reason is apparent. The decision to bypass Dakar under the prevailing circumstances was operationally correct but bureaucratically risky. The world flight’s path across Africa lay over French colonial possessions, and there had been a great deal of State Department correspondence with Paris discussing specific routes and the various restrictions that would apply to each. Once the French authorities had been told which of the approved routes Earhart would follow, they expected her to go where she had said she would go. All of the approved routes across Africa began in Dakar. Failing to land there, if seen as willful disregard of the approved itinerary, might result in the airplane and crew being impounded and fined. If missing Dakar was represented as a navigational mistake, however, especially one for which the female pilot took the blame for not listening to her male navigator, the French authorities might be less likely to hold it against her. Whatever Earhart’s motivation, the American public and the French authorities accepted her version of events, and the next day the flight repositioned to Dakar without incident.

Earhart’s bogus account, cleverly expedient as it was, has become a staple of the Earhart legend and has been used to justify endless speculation about Amelia’s relationship with Noonan and whether and how she might have disregarded his instructions during the Lae–Howland flight.