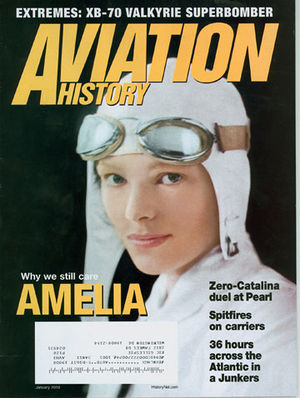 The January 2010 issue of Aviation History magazine has a colorized portrait of AE on the cover - the first time in the publication's history that they have featured a person rather than an airplane on the cover.

The feature article by my old friend Stephan Wilkinson is rather strange. Steve addresses the question of whether she was a good pilot by cataloging many of her shortcomings and then making excuses for them, just (as he points out) Amelia always did. He has some of his facts wrong but he treats us fairly. He ends the piece with the editorial position that:

"[P]erhaps it's time to stop and leave the lady where she lies. The search for Earhart has become an expensive yet ultimately pointless exercise. Ric Gillespie of TIGHAR at least admits that it's not the Earhart legend that drives him but the chase - the deduction and analysis, the footwork and fundraising, overcoming obstacles for a goal that is not gold bullion sunk in a Spanish galleon, or a rich- veined Dutchman's mine, or strange Nazi secrets entombed in a U-boat; it's the intellectual exercise.

Wilkinson suggests that the most meaningful way of all to honor Amelia is to "Let the mystery be." That's a gauntlet I'll be happy to pick up.