From TIGHAR
(Redirected from Arundel)
Jump to: navigation, search 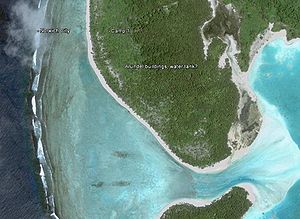 John T. Arundel (1841-1919) was the vice-chairman of the Pacific Islands Company, Ltd. He and his company were important in developing the guano industry in the Pacific during the late nineteenth and early twentieth centuries. Arundel helped develop Pacific islands such as Tabuaeran Fanning. He was also active in the copra trade and later started island coconut plantations with varying success, which included the first attempt at establishing a settlement on Nikumaroro.

1841 Born in England. His father, John Arundel, is Home Secretary of the London Missionary Society.

“The Colonization of the Phoenix Islands” by H. E. Maude.

From 1877 to 1881 the Group remained uninhabited, and probably unvisited. In the latter year, however, John T. Arundel, a British subject with large guano-mining and coconut-planting interests, landed on Sydney, and the permanent exploitation of the islands began. Arundel’s name is comparatively unknown to the general public and yet he is undoubtedly one of the greatest who have influenced the history of the Central Pacific: a true Empire-builder, his pioneering work has never received proper recognition and a biography of him is overdue.

As far as the Phoenix were concerned, Arundel soon obtained control of the whole Group, with the possible exception of McKean, apparently acting either as an agent of the former American companies, as on Canton and Enderbury, or as the direct transferee of any shadowy interests they might still be considered to have, as on Hull, Sydney, Gardner and Phoenix. During the course of the next decade, Messrs. John T. Arundel and Company proceeded to work the phosphate-guano deposits on Canton and Sydney; completed the working of those on Enderbury; and planted coconut trees on each of these islands, as well as on Hull, Gardner and probably Phoenix. In each case, with the exception of Enderbury, Arundel acted under guano and coconut planting licenses granted by the British Government. I should add that the planting operations on Hull were in charge of James Ellis, of Auckland, and his brother, the late Sir Albert Ellis, who was also associated with the phosphate working on Canton.

1884 His second daughter is born on Manra Island (Sydney Island), and named Sydney for the island.

1919 Died on December 1., member of the Pacific Union Club

"Near the palms we found two disused galvanised roofed huts and a large water tank, all of which were in a state of collapse, but which indicated to us that the island had at one time been inhabited, most probably with a view of growing coconuts, but that this had not proved to be very profitable and had been abandoned."

The diaries of John T. Arundel are available from the Pacific Manuscript Bureau