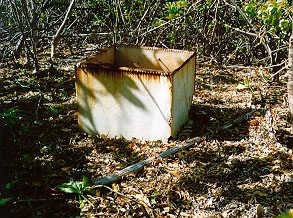 "About 25 meters into the bush from the vegetation line along the lagoon shore was a steel tank measuring 3 feet square by 4 feet high. It was painted white with the words “Police” and “Tarawa” dimly legible in blue. The corners and bottom were very rusty and the tank had not been watertight for a long time. The top was open, apparently rusted away, and in the bottom lay a steel ring which had clearly once been the fitting for a heavy round steel hatch that lay on the ground nearby with the words “Baldwins Ltd.–Tank Makers–London” molded into it. In the bottom of the tank were six coconut shell halves which had apparently been used as drinking cups. There were no coconut trees in the area" ("Gallagher's Clues"). 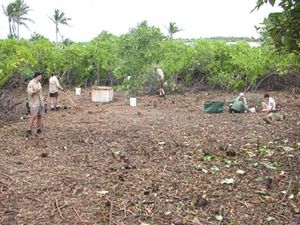 "It could be that it was Gallagher’s telegram of June 18, 1940, that prompted Pedro to send a work party to the kanawa grove at the southeast end and that the skull was found during that operation. I think that at least some of the clearing we see at the Seven Site (“Area 25”) in the June 1941 aerial photos is, in fact, the harvesting of the 40 trees that Gallagher wanted. The water tank and other material from the village may have been to support the logging operation" (TIGHAR Tracks 17:3, p. 6).

Further searching in the area near the steel tank led to the discovery of the Seven Site. 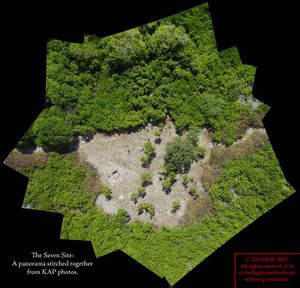 The tank is visible in this KAP montage.
Retrieved from "https://tighar.org/aw/mediawiki/index.php?title=Water_tank&oldid=7373"
Category: