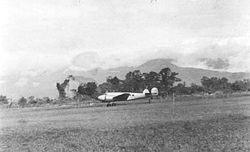 A close examination by Jeff Glickman of the takeoff film of the final flight suggests that the Electra may have lost a ventral (belly) antenna on takeoff. One anecdotal account, related years later, alleges that a length of antenna wire was found on the runway at Lae following Earhart’s departure:

R.E. Fullenwider (TIGHAR #0126) "spent some time in Lae during World War Two courtesy of Uncle Sam." As he remembers it, the old-timers there often said they hadn’t been surprised when Earhart was lost because "she left part of her trailing wire antenna laying on the runway" (TIGHAR Tracks, December 31, 1993).

The loss of the antenna may help explain some of the difficulties in communication between Earhart and the Itasca.