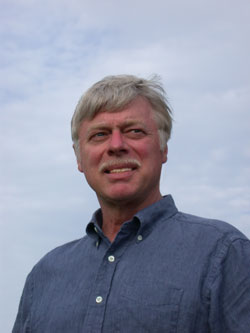 "Before founding TIGHAR, I had a long career in aviation safety, risk management, accident investigation, and underwriting. I got into that business because, although I have always loved aviation, I developed a loathing of airplane accidents after watching several friends die in a horrific multi-plane mid-air collision during an air race in Cape May, NJ in 1970. Airplane accidents take people away from people. They are, in most cases, preventable. All that is required is for the practitioners to approach aviation with discipline, respect, and responsibility."[1]

"The son of a decorated World War Two pilot, Richard E. Gillespie grew up around airplanes and learned to fly while he was still in high school. In 1985, with his wife Pat Thrasher, he founded The International Group for Historic Aircraft Recovery. Known by its acronym TIGHAR (pronounced tiger), the nonprofit foundation has an international membership of several hundred scholars, scientists and enthusiasts whose volunteer expertise and financial contributions support the organization's mission to promote responsible aviation archaeology and historic preservation.

"As TIGHAR's executive director, Ric Gillespie has conducted dozens of educational seminars at air museums around the U.S. and has organized and moderated conferences of air museum professionals in Britain and Europe. Gillespie has also led over three dozen aviation archaeological expeditions to remote areas of the U.S., Canada, Europe, Micronesia and New Guinea.