From TIGHAR
(Redirected from Plrm)
Jump to: navigation, search 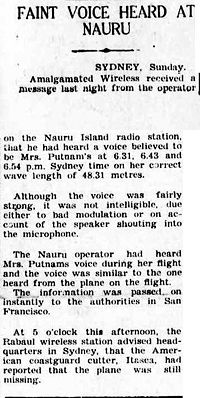 A complete exposition and analysis of all reported radio contacts with the lost aircraft is to be found in Finding Amelia, by Ric Gillespie; the book contains a wealth of primary sources in a research library on a companion DVD.

Bearings taken after July 2 suggest that a transmitter was operating in the Phoenix Islands.

"Both batteries were rated at 85 ampere-hours. If both were at full charge on arrival at Niku -- a reasonable assumption -- there would have been enough charge for about 90 minutes of transmission time. The total transmission time required for all of the credible post-loss signals is 451 minutes."[1]

Discussion of the battery system and charging rate.

Names in the news

KHAQQ was Earhart’s radio call sign and the signals were received on Earhart’s nightime frequency of 3105 KCs. The message was sent in “extremely poor” Morse code and only partial phrases could be understood.
This message was taken very seriously at the time and every available vessel – the USCG Itasca, the USS Swan, and a British freighter, the SS Moorsby – was diverted to search the ocean 281 miles north of Howland Island. They got there the next evening but found nothing. Reinforcing their frustration was a message from Lockheed officials stating that the location of the Electra’s radio gear would make it impossible for the airplane to transmit if it was floating.

Finding Amelia, pp. 163-166.
Angus and Ambler at Mokapu did not hear the transmissions, but just a few miles away at Radio Wailupe, three U.S. Navy operators had been puzzling over strange code messages on 3105 for the past hour. When the signals stopped, they contacted Coast Guard headquarters in Honolulu, which passed the news to Itasca: "Following copied Navy Radio Wailupe 11:30 to 12:30 GCT, '281 north Howland call KHAQQ beyond north don’t hold with us much longer above water shut off.' Keyed transmission [but] extremely poor keying behind carrier. Fragmentary phrases but copied by three operators." ...
Unfortunately, just how that information should be interpreted was not at all clear. Itasca received it via Coast Guard headquarters in Honolulu, not directly from the navy. Apparently someone at Wailupe telephoned the Coast Guard with a description of what they had heard. Whoever took the call at Hawaiian Section wrote it down, and the radio operator passed the report along to the cutter. Such a transfer of information offered plenty of opportunity for error, and many questions remained unanswered. How did the fragments of the message break down? For example, was it "281 north" . . . "Howland call KHAQQ," or was it "281 north Howland" . . . "call KHAQQ"? The reception was reported to have spanned a one-hour period. Was each phrase heard only once, or were they parts of a message sent over and over again?

"Two ham operators in Los Angeles - Walter McMenamy and Karl Pierson - were responsible for a great many of the first reports of post-loss signals but the pattern of what they said they heard is completely at odds with what was being heard in the search area and all the information they claimed to have gotten from Earhart could have been had by simply monitoring Coast Guard radio traffic. McMenamy and Pierson were almost certainly perpetrating a hoax - perhaps with the best of intentions (i.e. to encourage a large Navy search) or perhaps just to puff their own reputations as hot-shot radio experts, or some of both - who knows? The point is that the patterns of what they reported hearing - the times, the frequencies, the content - sticks out like a sore thumb when viewed in the context of the other reports."[2]