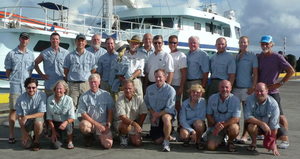 The 2010 expedition was divided into two parts: robotic exploration of the Nuritan reef face and the lagoon, and terrestrial archaeology at the Seven Site. A small comparative study in the village (described below in connection with the Seven Site) was aborted.

We had visually inspected the Nutiran reef down to about 40 meters, but were thoroughly uninformed about what lay at greater depths. To search this area, we entered into a contract with Seabotix, Inc. to deploy a ____ remotely operated vehicle (ROV) equipped with (describe). The ROV had a maximum operating depth of 300 meters. A search area was established running ____ meters along the reef and extending to a depth of 300 meters. Seabotix also provided an autonomous underwater vehicle (AUV) for use in the lagoon.

Excavations at the Seven Site

The 2001 and 2007 field seasons at the Seven Site had shown us several things, notably:

1. The site comprises a surge ridge made up of coral rubble; 2. Virtually everything of a cultural nature (fire features, mollusk and bone features, artifacts) was found in the top 10 cm. of the rubble, but under a thin "pavement" of relatively large (finger-size and up) coral fragments, making things extremely difficult to see even once the vegetation was cleared; 3. Artifacts were widely distributed across the site, without obvious pattern; 4. There have been several sequential uses of the site, reflected in a range of artifact and feature types probably associated with the PISS colonists, the Coast Guardsmen, and quite likely the castaway whose bones were recovered in 1940; 5. The artifact and feature assemblages associated with these different site-user groups were not easily separated stratigraphically; they all occurred in the top 10 cm., though micro-stratigraphic differences could sometimes be noted; and 6. While metal detecting was effective in finding concentrations of metalic items, it obviously revealed nothing about the distribution of glass, plastic, and other non-metallic materials.

These observations led us to decide on a strategy of large-area exposure -- stripping the top 10 cm. off a large portion of the site and recording/collecting everything found. Like all archaeology, this strategy involved destroying much of what we were trying to study, but we hoped it would reveal the overall organization of the site and enable us to find and interpret both metallic and non-metallic material.

One important caveat needs to be noted at the outset. When we speak of exposing a "large portion of the site," this implies that we know how extensive the "site" actually is, and we actually do not. The areas in which we worked in 2001 and 2007, both embraced within the larger area we worked in 2010, contain distributions of artifacts and features that do not seem to extend beyond the boundaries of the area we have each time temporarily cleared of Scaevola; transects cut into the bush beyond these boundaries and inspected visually and with metal detectors have not revealed additional features or obvious artifact clusters. However, we cannot say for certain that we have established the full extent of the site.

The excavation strategy involved laying out a series of parallel 2-meter-wide "lanes" running along the axis of the surge ridge and excavating these to 10 cm. depth by trowel. This operation, involving the whole team working on a sort of skirmish line, was referred to colloquially as "Rolling Thunder." A total station established over permanent datum 3 (as established in 2001) would be used to shoot in locations of all apparently significant artifacts and features encountered. Material like shell, animal bones, and the ubiquitous fragments of corrugated and other iron would be collected by 2-meter lane sections, and a running sketch-plan would be maintained of each lane. A video record would be kept of the whole operation, employing a photo tower constructed near the southeast edge of the site, and once cleared, the site would be imaged repeatedly using kite aerial photography (KAP). Artifacts or bones that might contain DNA would be collected under sterile conditions. Once Taylor Keen and the ground-penetrating radar (GPR) arrived on the second ship, GPR would be used to scan the site beyond the excavated area; the daylight ultraviolet (UV) scanner employed in 2007 would also be used.

Tom King was in overall charge of Seven Site operations, assisted by Gary Quigg and Meg Lickliter-Mundon. Tom Roberts and Meg Lickliter-Mundon handled the total station, and Meg also was responsible for the recovery, labeling and bagging of specific artifacts, including those recovered in accordance with the DNA protocol. Bill Carter and Karl Kern comprised what we called the "Dynamic Duo" team, using chain saws and loppers to cut a broad avenue (the "Carter-Kern Highway" southeast of the apparent site boundary for about 50 meters along the ridge crest and then eastward to the beach; this permitted intensive inspection of a sample of the ridge beyond our major search area, and facilitated the removal of cut Scaevola. Taylor Keen was in charge of GPR. Jon Overholt and Karl Kern too charge of tree-ring boring (discussed below). Andrew McKenna handled the UV scanner. In addition to his responsibilities as expedition leader, Ric Gillespie led a systematic search of coconut crab lairs northwest of the main excavation area, in the event these might contain bones carried to them by their occupants, and conducted period metal detector sweeps of areas under investigation. Mark Smith conducted video documentation.

Work began as usual with a brush-clearing operation. Scaevola was cut using pneumatic loppers and chain saws, and carried to a slash pile on the lagoon shore. Once the Dynamic Duo had opened the Carter-Kern Highway, Scaevola was also carried to the ocean beach. We opened up an area embracing all the areas previously inspected in 2001 and 2007, and extending somewhat farther along the ridge to the southeast. Trees that were not Scaevola were left in place.

Once the basic working area was cleared, we laid out a 15-meter base line (a nylon rope staked at both ends) perpendicular to the axis of the ridge, just northwest of the "Big Ren" and the "D" units excavated in 2001. The baseline rope had nylon strings attached every 2 meters. Stretched out perpendicular to the base line and staked, these formed seven 2-meter-wide lanes, designated Lanes A through G. Two team members then took each lane and began systematically troweling toward the southeast, stripping the surface down to 10 cm. depth. Each "lane team" was responsible for keeping a running record of its observations, using standard "lane forms," for collecting ecofacts and such common artifacts as ferrous fragments by 2-meter segment and/or by observable feature, and for calling on Meg and Tom to record specific locations and recover artifacts.

As work progressed, at Megan's suggestion two more lanes, L and L-2, were laid out perpendicular to lanes A through G at the southeast edge of the site, and excavated in the same manner as the other lanes. A standard 2x2M unit was added to the block of "SL" units dug in 2007. Another group of units was excavated beyond the L and L-2 lanes to explore a metal detector hit at the head of the Carter-Kern Highway; these were designated the X-units. GPR, UV, and metal detector scans were conducted in 15x15 meter blocks NW and SE of the main study area; shovel test pits and one 1x2M unit were dug to explore apparent GPR anomalies. Figure XXXX is a map of all excavations and related scans.

Gallagher, it will be recalled, described the bones found in 1940 as lying under a ren (Tournefortia) tree. We were curious to determine whether the "Big Ren" at the Seven Site might be old enough to be Gallagher's ren. It is generally understood that dendrochronology works poorly if at all in the Pacific, because trees do not lay on annular rings that reflect seasonal changes. However, we thought that trees on Nikumaroro might reflect periods of drought in their ring structure, and that these might be dated using historical records. Accordingly, we undertook a systematic program of tree-boring, using equipment generously loaned by the University of Maryland Department of _______. In all, five rens were bored -- the Big Ren plus four smaller trees found by the Dynamic Duo along and rather beyond the Carter-Kern Highway (Insert map of trees). In addition, two sections were cut from a large dead ren ___ meters north of the Big Ren. The resulting cores and sections were processed by Taylor Keen of the University of Maryland..... (describe results)

Several people had contacted TIGHAR over the months prior to the expedition reporting things they had seen while examining imagery of Nikumaroro on Google Earth. One report, by _______, was of what appeared to be block capital letters spelling out "ELP," with what might have been a muddled "H" to their left, made up of rocks in the bottom of one of the small ponds near the Loran Station site on Ameriki. Mr. _____ also thought he could see something shaped like the Electra in the lagoon, and kindly provided us with precise coordinates. Although Jeff Glickmann warned us that the perceived anomalies were artifacts of satellite imaging technology, several team members nevertheless spent part of our one "off" day examining the locations; we also had the AUV survey the vicinity of the ostensible Electra. Nothing was observed in either location, or found in metal detecting. The "Electra" location had a number of near-surface coral heads, but nothing that appeared to be structural or that triggered a response from a metal detector. The AUV also detected nothing at this location. The shallow pond at Ameriki contained shelving coral, but no stone features of any kind.

Although data are available from other Pacific island archaeological contexts comparable to the bone-rich fire features of the Seven Site, we hoped to be able to find a fire feature in the colonial village whose excavation would provide a more direct comparative sample. With this in mind, and Laxton's 1949 map of house plots in hand, Gary Quigg and Lonnie Schorer, assisted by Megan Likliter-Mundon and Ric Gillespie, set out up the Sir Harry Luke Avenue to find the house sites of early colonists _____ and ______. The hope was to locate and excavate their cookhouses. Unfortunately, it turned out that the property boundary markers along the avenue were for the most part badly disturbed and obscured by tree growth; the very clearly delineated example we found in 1997 (which we relocated) being an exception to the rule. Even when approximate house sites were identified, it proved impossible in the time we had available to locate any cookhouse sites. It did appear, however, that each house site typically had at least one small but very dense cluster of coconut palms, and it finally dawned on us that these might represent cookhouses, with vigorous tree growth stimulated by decaying organic material and wood ash. Without major defoliation of the house sites, however, it was impossible to verify whether this was the case, and the search for a comparative fire feature was abandoned.