The March of Time

From TIGHAR
(Redirected from March of Time)
Jump to: navigation, search

When Amelia Earhart and her navigator Fred Noonan did not arrive within visual range of Howland Island on the morning of 2 July 1937, their last airborne radio messages to the U S Coast Guard Cutter Itasca left few clues to their location. Even days after the Lockheed Electra’s fuel would have been depleted, wireless stations continued to hear what they thought were Earhart’s radio transmissions on her designated radio frequencies. Guidance in a 5 July 1937 message from the U. S. Coast Guard headquarters in San Francisco received by the USCGC Itasca and USS Colorado, stated "Radio technicians familiar with radio equipment on plane who say that the radio can't function now, 3 days after the disappearance, unless the plane is on land and able to run the starboard engine.” [1]Additionally, some radio components were mounted low in the aircraft and would have been submerged if the plane had ditched in the sea. Thus, the verification of the “post loss” radio signals’ genuineness was a critical factor in determining whether Earhart may have, in fact, been on land. Hoaxes, cranks, and commercial radio docu-dramas had to be identified and discounted as being legitimate Earhart transmissions. The March of Time was one such dramatized news program which added confusion and created uncertainty during the Earhart search. 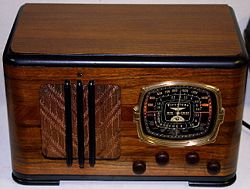 Table model radios similar to this one cost about $40, or half a months pay at the time. (Courtesy, Radio Era Archive. Used by permission.)

Early radio in the United States from the 1920’s into the World War II period is often referred to as the “Golden Age of Radio”. The medium was rapidly evolving, as was its technology. The number of “radio homes” had grown from 12 million in 1930 to 22 million by 1935, in spite of the depression. The cost of a table model radio had decreased to around $40, (still a half month’s pay for many Americans). By 1935, even 2.5 million automobiles were equipped with radios. At the start of World War II, 87% of homes in the U.S. had radios. [2] The first half of the 1930’s decade saw the greatest idea development in the history of radio programming. Electrical recording was developed by the mid Twenties, but the concepts of “on scene news reports”, “remote broadcasts” and regular newscasts were in their infancy. “Breaking news” reports were not easily done with early state of the art radio technology. Radio genres evolved rapidly during this period and provided a sense of “being there”. These included:

The March of Time Radio Show 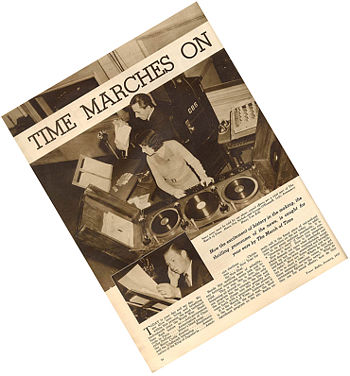 Tom Carskadon chronicles the production of March of Time from conception to the airing in this January 1935 issue of Tower Radio. It is found at University of Virginia Xroads

The innovative Time magazine management of the Twenty’s began experimenting with ten minute radio news broadcasts in 1928 . News stories, drawn from the pages of Time magazine, were read in what were termed “NewsCasts”. The following year “NewsCasts” were augmented with electrical transcriptions of current news segments enacted by professional actors with sound effects and termed “NewsActing”. These fifteen minute programs were offered free to stations who in turn would agree to advertise Time magazine. Henry Luce became convinced that this news concept could be expanded and the March of Time began on CBS on 6 March 1931. With a title and theme music derived from the Harold Arlen song, “The March of Time” a solid listener following developed for the new program. During the internationally turbulent era of the mid Thirties, Tom Carskadon wrote in Tower Radio in January, 1935: “On the radio, only one program has the courage, the bite and the drive to plunge into this actuality and come forth with a panorama of the present. It’s the March of Time. Listeners say it is the most vivid, the most real, the most significant program on the air. Radio experts call it the finest piece of out-and-out radio production on the air today. In addition to its great audience popularity, it is a “showman’s show” if there ever was one.” [4] Raymond Fielding wrote in The March of Time, 1931-1951 that "great care was taken to secure transcripts of authentic statements and comments of the celebrities who were impersonated on the program. In those cases in which these could not be obtained, writers were given the dramatic license to contrive and re-create such dialogue as seemed appropriate to the characters and situation." A thousand man-hours were required to produce each show--33 hours for each minute of air time. This included news research, editing, clerical work, music rehearsal, cast rehearsal, script writing and editing. The financial burden was immense for Time magazine and an attempt to discontinue the program in 1932 was abandoned when listener response was so overwhelming that Time management relented and the program was continued throughout the Thirties, and in a different format into the early Forties.[5]

Tom Carskadon chronicled the creation of a March of Time production from its inception to going on the air, in the January 1935 edition of Tower Radio (University of Virginia Xroads). He described in detail how Time magazine editors selected up to nine current news articles which special radio writers turned into skits. The skits were next handed to the advertising agency, Batten, Barton, Durstine and Osborn which made the selections for that week’s program and determined the order in which they would be heard. They also handled the production details. Casting, timing, music, and sound effects were coordinated—skits were dropped if necessary. Scripts were written and re-written. By Thursday morning, the stock company of actors and extras began rehearsals, and scripts were updated to keep up with late changes in the news stories. By Friday evening, nearing the live air time, the last script update was made and the production was ready to begin.

Impact on the Search for Earhart 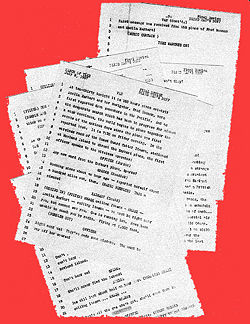 March of Time Radio Script for 8 July 1937 Broadcast on CBS Radio(Courtesy: Time, Inc.)
On 8 July 1937, less than a week after Earhart’s Lockheed Electra 10 was lost, the radio operator of an Inter-Island Airways plane (now Hawaiian Airlines) heard a radio transmission he thought was from Amelia Earhart sending an SOS to ships at sea. After reporting this to authorities, it was passed to searchers. Later it was learned he actually heard a shortwave relay of the March of Time dramatization of the Earhart disappearance being sent to Hawaiian radio stations. [6]

The Captain of the USS Colorado, Wilhelm L. Friedell, wrote the following in his report to the Commandant , Fourteenth Naval District: “During the previous twenty-four hours two reports of the plane had been received. A report was received from Melbourne, Australia “Plane between Howland and Samoa Group, ten hours West.” No further information was given nor was the report verified. The other report was received at 1800 stating that a reputable citizen of Hilo at 1515 had heard Amelia Earhart call the ITASCA and the ITASCA answer. The ITASCA was immediately asked for verification and stated that they had no word. What then did it mean, was a joke intended, a fraud perpetrated or a mistake made? The mystery was solved shortly by the report that the listener had accidentally tuned in on the March of Time broadcast and believed the reproduction and acting to be real.” [7] In 1982, Frederick J. Hooven, wrote a comprehensive report on the Earhart disappearance. Hooven was the innovator of the Automatic Direction Finder (ADF) for aircraft and had installed his system on the Earhart aircraft. It was later removed by Earhart to save weight. Hooven wrote in his report of the March of Time broadcast: “There were excited reports from many places when the March of Time reenacted an imagined rescue on the broadcast radio.” [8]

Original Electrical Transcriptions (ET) of most March of Time productions are extremely rare, and finding an audio copy of either the 8 July 1937, or the second program on 15 July 1937 is difficult. Electrical Transcriptions were 16” aluminum based discs, which were later scrapped for their aluminum content during World War II. They were replaced by glass based ET’s, an extremely fragile product that did not survive well. TIGHAR researches have located and obtained a sound recording of the 8 July 1937 March of Time program, and Time, Inc. has furnished TIGHAR with microfilm prints of both the 8 July, and 15 July scripts for these productions. The 8 July 1937 March of Time script paralleled the known events of the first six days following the Earhart disappearance tolerably within the “dramatic license” the editors allowed the scriptwriters to use. The Earhart skit was the last of several that constituted that week’s program--probably last, just as today’s programming uses a teaser to keep listeners tuned in to the end of the program. The script had been updated and marked as “FINAL REVISE” and titled “BLIND MAN’S BUFF”, with one pen and ink change which corrected the Narrator’s closing comments from “it has been some 20 hours” updated to “it has been just 21 hours and 10 minutes”… In the script there were six dramatized Earhart radio transmisions. Understandably, misperceptions developed among listeners hearing only portions of this March of Time news drama, but from the actual script, now available to TIGHAR researchers, it is clear there was no portrayal of two way communications between Itasca and Earhart, nor was there a dramatization of Earhart’s rescue. The script does not contain sufficient detail for it to have been the been the progenitor of post-loss radio messages heard in North America. Below is a brief outline.

The entire "March of Time" broadcast was 30 minutes long.

The Earhart segment was the last of 6 brief segments presented, immediately followed by an Electrolux commercial.