Location of the Ontario and Myrtlebank. 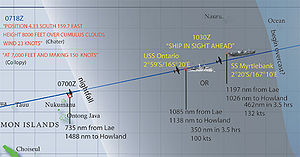 MV Myrtlebank was a 5,150 ton freighter owned by the large shipping conglomerate Andrew Weir & Co., one of the largest fleets of sailing ships under the British flag. In 1905 the company was registered as Bank Line Ltd.

Myrtlebank was built in 1925, and was scrapped in 1960. Its length was 420 feet, with a beam of 53'9". This information has been extracted from the website called "Ships Nostalgia" [1], where is also found this "fond" remembrance of Myrtlebank by one of its able bodied seamen about a dozen years after the disappearance of Amelia Earhart:

"The American pilots in the Panama canal blanched at the sight of her and insisted in a tug at bow and stern for the canal transit ... Unmodernised in 1950 she was a horrible 1925 relic-no running fresh water, baths out of buckets, that had to be heated on the galley stove."

Click here to view a thumbnail (on eBay) of an undated picture of the Myrtlebank in the harbor at Capetown, South Africa.

Myrtlebank figures in the disappearance of Amelia Earhart because on the evening of 2 July 1937 the radio operator on Nauru heard her say, “Ship in sight ahead.” The only ships known to have been in the area were USS Ontario, on station at 2°59.02′S, 165°23.20′E to provide assistance to Earhart, and MV Myrtlebank[2]. (For a more extensive discussion of the Myrtlebank's location, see the article on the USS Ontario.)