From TIGHAR
(Redirected from Loran)
Jump to: navigation, search 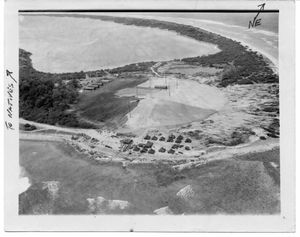 1944 aerial photo taken during the construction of the Gardner Island LORAN station. Detachment "D" personnel lived in the "tent city" shown near the beach. 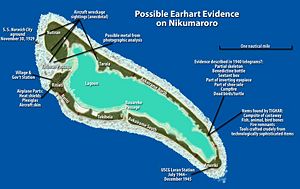 Map of possible Earhart evidence on Nikumaroro (Gardner Island), with USCG LORAN station at far lower right. The spot was called Ameriki by the Gilbertese settlers.

On July 24, 1944, U.S. Coast Guard Construction Detachment D (Unit 211) arrived aboard USCG Balsam to begin construction of the LORAN facility at the easternmost tip of Nikumaroro.

The Gardner LORAN went on the air September 29, 1944 with a staff of twenty-five men as USCG Unit 92. Commanding officer Ensign Charles Sopko restricted his men to the immediate area around the station, limiting their contact with the Gilbertese colonists to prevent "fraternization."

Some time in late 1944 or early 1945 PBY supply pilot Lt. (jg) John Mims saw the Gilbertese settlers using an aircraft control cable as a heavy-duty fishing line leader. When asked where it came from, one of the Gilbertese answered, "When our people first arrived a few years ago there was an airplane here."

The Loran station was de-activated and abandoned in December 1945.

In March 1946 a Coast Guard work crew disassembled and secured the station's LORAN gear in the quonset huts which had been used as living quarters. A member of this crew, Chief Carpenter’s Mate Floyd Kilts, later (1960) told a San Diego newspaper reporter that one of the Gilbertese told him of "the skeleton of a woman with American shoes and the skull of a man" found by the island's first settlers in 1938.