From TIGHAR
(Redirected from Lambrecht)
Jump to: navigation, search 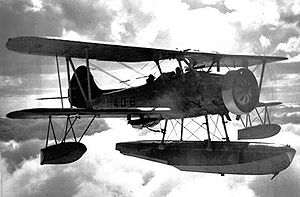 John Osgood Lambrecht was the senior aviator in the flight of three floatplanes from U.S.S. Colorado that searched Gardner Island from the air on July 9, 1937.

"Two were regular enlisted observers and one was the ship's Assisstant 1st Lt. and Damage Control Officer. The 'trained observers' were not trained in aerial searching. The mission of the battleship's planes was to act as forward observers to adjust the fire of the big guns."[1]

Three Vought Corsair 03U-3 biplanes were launched during the Colorado search.

This U.S. Navy photo is the only picture known to have been taken of Gardner Island during the 1937 search for Amelia Earhart. The photographer is unknown, but this print of the photo, obtained from an archive in New Zealand, is inscribed “U.S. Navy (pilot) July 9, 1937” on the reverse. The "North" arrow is not geographically accurate; see Maps of Nikumaroro for the correct N/S orientation of the island. 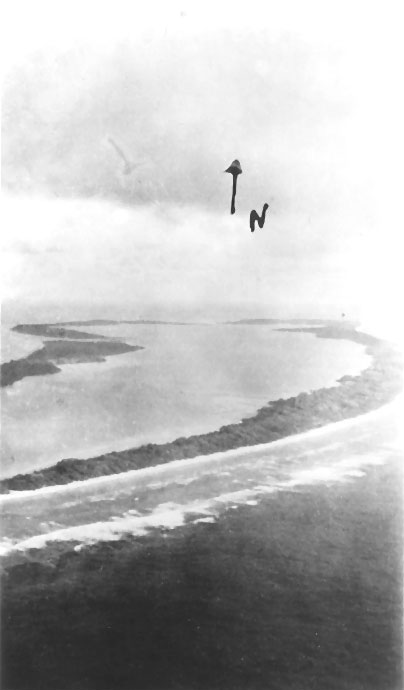 These images reflect efforts of members of the Forum to determine the point of view from which the Lambrecht photo (shown above) was taken.

I just noted that some of the TIGHAR members tried to match Google Earth with the Lambrecht photo. I did the same too some weeks ago and included the Google Earth kmz from which I derived the following: (see Lambrecht combined JPG). I tried to match the picture as good as possible, and strangely, could not match as good when having the island centered in GE (only when Niku left in left pane). The Lambrecht picture seems level (horizon) but I have some reservations. 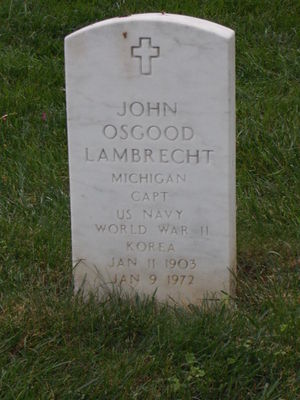 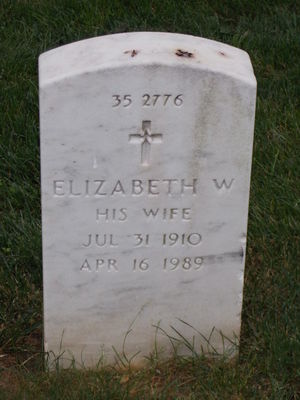 Lambrecht is buried in Arlington National Cemetery, not far from the Tomb of the Unknowns. He died in 1972, two days short of his 69th birthday. His wife, Elizabeth, survived him and is buried in the same grave, which is located in Section 35, Site 2776.[3]

In 2009, on a genealogy website, a person identified as Annette Blum responds to an inquiry about John Osgood Lambrecht. She writes that John was married twice, and that she is the granddaughter of Lambrecht’s first wife (who had a daughter by a previous marriage):

Unfortunately, Captain Lambrecht had no direct descendants. However, he married twice, formally adopting my mother in 1938, who was the child of my widowed grandmother at the time. After my grandmother's death in 1951, he remarried in 1954, and his second wife's younger daughter (from a previous marriage) is still alive and has a scrapbook that her mother compiled. I have seen the scrapbook which contains a letter, written later to a friend, in which he expresses some of his thoughts on the search. I cannot recall the exact nature of his opinions and my step-aunt lives far away, but if I run across it I will try to remember to post it.[4]

As I go through the papers and letters in my mother's house (she died in 2006) I am finding more and more stuff pertaining to Captain Lambrecht. Should anyone know of any of his collateral family members, I would be pleased to be in touch. He came from a large family, but I don't know if there are any descendants in my generation.

Another genealogy website names the woman who Annette Blum says was her grandmother, calling her Annette Alger Bailey, and confirms that she married John Lambrecht in 1938. Apparently Annette Blum was named for her grandmother. The website says of her grandmother: “Annette died in 1951, late in the year, of suicide, brought on by alcoholism, and, nowadays we would assume, depression, though at the time the symptoms did not account for the cause.”

After Annette Lambrecht’s death, John Lambrecht married (in 1954, according to Annette Blum) the woman named Elizabeth Wheeler Allen. It is she who is buried with John at Arlington National Cemetery, having survived him by 17 years.

But it seems that there actually was an earlier marriage for John Lambrecht that did not last long, perhaps ending in divorce. A New York Times article in February 1935 has this headline: “MISS JEAN BRICE WED TO AVIATOR OF NAVY; Marriage to Lient. John Osgood Lambrecht Took Place on Saturday in Palm Beach.” At that time, Lambrecht was serving as a flight instructor at Pensacola. One can imagine the dashing aviator meeting a young woman of high society during his time in Florida, one whose family rated an item in a New York newspaper, and then that marriage not lasting for very long.

John Lambrecht was a graduate of the United States Naval Academy in Annapolis, Maryland, class of 1925. In the school’s 1925 yearbook he is shown as hailing from Viola, Wisconsin, and being called by his fellow cadets “Chink,” “John,” and “Osgood.” That narrative implies that he also had lived in both Illinois and Michigan. (His grave marker at Arlington lists Michigan as his home.) There are intimations that he became a fashionable dresser and ladies’ man, as well as a participant in the Academy’s boxing program, and was someone quite intent on making his mark with a naval career.

Having watched those wild waves on Lake Michigan from both Illinois and Michigan, John decided to go out for bigger game, so he immediately discarded his English Walkers and that cute little blue suit for a pair of Stetsons and some more blue — Navy blue. And it came to pass that by plugging at the right time and in the right way he managed to frustrate whatever hopes the Ac[ademic] Department ever had of sending him back to civilian life. He was not with us very long before he showed his pugilistic talents which gave him numerals Second Class year. A lead with the left and a cross with the right is just a business way of saying “it won't be long now.” Everything capable of making ye knots, interests him whether it is an old tub of a boat or not. Speaking of boats, there is one exception to be made — canoes — especially on North West Arm. When we hear him begin, “Now when I made that trip to Algeciras,” or “On that ride to Wisconsin Youngster Sep. Leave,” there is no doubt in our mind that he loves all the rest. “What — no mail!”

Internet searching reveals that there was a Congregational minister in Viola, Wisconsin, at the time of John’s studies at the academy who was named John Lambrecht, and that this man had also served congregations in Illinois and Michigan. Perhaps the “English Walkers and that cute little blue suit” John Osgood Lambrecht arrived at the Academy wearing were stereotypical of a pastor’s son.

In another posting on the genealogic website devoted to the Lambrecht surname, Annette Blum in 2009 reveals more about the family of John Osgood Lambrecht, including that his brother (Peter D. Lambrecht) was a Marine Corps aviator, and that there were “two or three other brothers. One was shot down over China. [COL Peter Donald Lambrecht, USMC, disappeared on a mission over Korea in 1952.][5] Their father was a minister (Presbyterian or Congregational, I think) in Michigan, but I don't know where.” She was responding to another person named John Marsh, who subsequently identified himself as being from Marshall, Michigan, and “the grandson of John Osgood Lambrecht's uncle, Lawrence Wesley Marsh.” Another person posted a response, identifying John O. Lambrecht’s parents as “John Lambrecht(1870-1939) and Nettie Marsh.”

In the final months of World War II in the Pacific, having attained the rank of Captain, Lambrecht assumed command of the small aircraft carrier USS Makassar Strait. After the war, he was transferred to the East Coast, doing staff work at the Pentagon and for the Atlantic Fleet. In July 1951 Captain Lambrecht began a year-long command of the aircraft carrier USS Oriskany.

A short biography of John Osgood Lambrecht that was published in the ship’s cruisebook can be found on a website devoted to the history of that vessel:

Captain John O. Lambrecht USN took command of the Oriskany at Izmir for the second half of the cruise, relieving Captain Percy Lyon USN on Thursday, July 26, 1951. Captain Lambrecht came to the Oriskany from the National War College in Washington. Previously he had had wide experience in highly responsible naval assignments. A member of the Annapolis Class of 1925, he first served in engineering and gunnery on the battleship PENNSYLVANIA and in the Far East. In 1930 he took flight training at San Diego and Pensacola. By 1934 he served as an instructor at Pensacola. After that he spent more than 3 years as an air officer in Asiatic waters. Just before Pearl Harbor he went to Corpus Christi as Operations Officer, leaving that assignment just after he made Captain in July 1943. He became Chief of Staff, ComCarDiv 11, Pacific Fleet. Then he was ordered to NAB Manus as Commandant. In July 1945 he took command of the aircraft carrier MAKASSAR STRAIT. The next year he was assigned to OpNav as Assistant Chief, Committees (Aviation), General Planning Group. In February 1948, Captain Lambrecht joined the Staff, Commander In Chief, US Atlantic Fleet, staying until August 1950. He was Assistant Chief for Plans, and Assistant to the US Representative to the North Atlantic Ocean Regional Group. From there he moved to the National War College, before coming to the Oriskany.