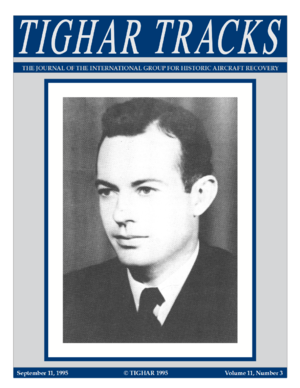 John Mims is TIGHAR member 1936. We first located him back in March of 1995, or more accurately, his daughter Rosemary Fisk, TIGHAR member 1934, located us to tell us about the stories her father had told for many years. We interviewed Dr. Mims at his home in Tuscumbia, Alabama and his recollections appeared in TIGHAR Tracks Vol. 11, No. 3 in September 1995 in an article entitled "Catch of the Day." His picture was featured on the cover.

Between December 1944 and February 1945, Ensign John Mims, assigned to Patrol Aircraft Service Unit (PATSU) 2-2 based at Canton Island, made eight trips to Gardner as co-pilot of U.S. Navy PBY-5 BuNo 08456. Ric Gillespie reported that "We have the paperwork on those flights. I can tell you how many pounds of mayonnaise were delivered on a particular day."

On one of those visits the settlers proudly showed him a large fish they had just caught. Mims was astonished to see that the hook in the fish’s mouth was crudely fashioned from aircraft aluminum and the "leader" on the fishing line was a control cable from an aircraft smaller than a PBY. As Mims wrote in a March 1995 letter to the Smithsonian National Air & Space Museum:

I asked the native about the hook and leader, and he promptly informed me that it came from a wrecked plane that was there when he arrived some three years earlier (apparently no one lived on the island prior to 1941).

The first work party of the Phoenix Islands Settlement Scheme arrived in December 1938, so Mims' supposition that his informant arrived with the first settlers was incorrect, but the story does suggest 1941 as a not-later-than date for the discovery of airplane debris. When asked where the wreck was located, Mims' informant just shrugged. Apparently by 1944 the wreck had either disappeared or whatever wreckage had washed up had been salvaged.

In addition to heavy-duty fishing tackle, Mims saw the islanders on Gardner using …"crude knives made from aluminum by grinding it with seashells and sand. At the present time I still have some jewel boxes and outriggers with inlaid diamond, heart, and star-shaped pieces of aluminum that they said came from the wrecked plane." TIGHAR had one of the inlays tested. It is aircraft–grade aluminum.

Ensign Mims was puzzled by what he had seen and the story he had been told. He couldn't imagine where an aircraft at Gardner in 1941 could have come from. When he returned to Canton Island he asked the District Officer if the British had lost a plane at Gardner.

He replied that no British planes had been there and neither had the Americans lost any planes there. I asked him if this could be a part of Amelia Earhart’s plane and he said it could well be, but he had little interest in a story of a lost pilot since the war was in progress. Also, he joked that the woman was American and that the 4th of July and Thanksgiving with the Americans was about all the American history he could take.

Coast Guardsman Glen Geisinger was stationed on Gardner from late 1945 until the closing of the Loran station in May 1946. Like Mims a year earlier, Geisinger bought or traded for carved wooden boxes and model canoes that featured metal inlays said by the islanders to have come from "the downed plane that was once on the island." 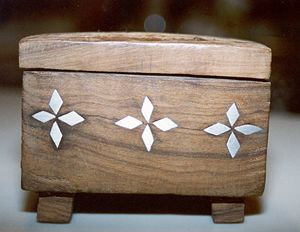 John Mims collection.
Mims has a collection of small kanawa wood boxes he received as presents from the villagers on Gardner. They are inlaid with small decorative pieces of metal which he was told is metal from the plane. He allowed us to remove one for testing. It is 24ST Alclad --- aircraft aluminum. That this is not just a tale he concocted after seeing publicity about TIGHAR's work is confirmed by his daughter's recollections of playing with the boxes as a young girl. She always knew them as "the boxes with the metal from the crashed plane."

Mims' story is anecdote, but it fits perfectly in a mosaic of other anecdotes from Fiji and Funafuti which tell of an airplane wreck at Gardner Island before World War II.