From TIGHAR
(Redirected from HFDF)
Jump to: navigation, search 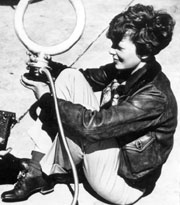 "Direction finding (DF) refers to the establishment of the direction from which a received signal was transmitted. This can refer to radio or other forms of wireless communication. By combining the direction information from two or more suitably spaced receivers, the source of a transmission may be located in space via triangulation. This is called a cross-cut or fix."[1]

If one has a directional receiver antenna, it is possible to find the direction from which a transmission is coming by rotating the antenna (as with Eahart's loop antenna or, if the antenna is fixed, by flying the aircraft in a circle. In either case, the goal is to find the point in the rotation or the circle where the signal is weakest. At that point, the transmitter must be at a 90 degree angle to the axis in which the antenna is most sensitive. If no other information is available other than that derived by the movement of the antenna, one would not know whether the signal was to the 90 degrees to the left or 90 degrees to the right of the antenna's bearing at the minimum.

There are many ways to resolve the ambiguity in the information provided by the directional antenna. One way is to move to a new position and take a new reading. The second reading should provide a triangulation pointing to the radio source.

A moment's thought will show that it is only necessary to rotate the antenna 180 degrees. A full 360-degree sweep should produce two nulls.

"High-frequency direction finding was only developed in the mid 1930s, and the first HF/DF were deployed circa 1936. Apparently HF/DF sets were quite scarce in 1937, and probably largely controlled by OP-20-G, which makes the dispatch of an HF/DF set to Howland retrospectively quite astonishing. Guam asked for an HF/DF set in late May 1937, and was turned down. They were able to "borrow" a set which they reported having had great difficulty getting to work as of September 1937-one wonders if the Howland HF/DF set ended up being to sent to Guam. The Philippines had HF/DF capability in late 1936. [no info found on Hawaii] By 1940 the network was much more extensive, but in 1937, it was pretty rudimentary, and it isn't clear the extent to which the Navy had a real operational capability."[1]

"The modern broadband loop antenna depends on a carefully engineered amplifier to keep the sensitivity constant over a wide range of frequencies" (Hue Miller, 30 June 2000 Forum.)

Direction finding on the final flight

From the Chater Report:

"Miss Earhart and Captain Noonan spent a considerable time in the radio office and as previously mentioned it was learned that neither of them could read morse at any speed but could only distinguish letters made individually slowly and repeated often; in that case their direction finding apparatus would be useless or misleading unless they were taking a bearing on a station using radiophone which could give the station position on voice. We understand the 'Itasca' was to do this but if the plane was unable to pick up the 'Itasca' it is doubtful if the direction finder would be any use to her."

There was some borrowed high frequency direction finding equipment on Howland, but the operators apparently mismanaged the batteries and failed to get a bearing on the plane.

"According to Bellarts' later recollections, the HF/DF loaned to Dick Black and Lt. Dan Cooper, and operated on Howland by Frank Ciprianni, was a primitive and poorly engineered device."[3]

On Howland Island, Cipriani heard the transmission as well, although he was “using the direction finder and receiver sparingly due to heavy drainage on batteries.”[4] The signal Cipriani heard was strong. He rated it strength 4 (“good, readable”), but it was too short and obscured by too much static for him to get a bearing. (93)

Galten immediately replied to Earhart’s call: “KHAQQ from Itasca. Your message okay. Please reply with voice.” Onshore, Cipriani heard Galten’s transmissions, but his batteries were now so weak that he had not been able to hear Earhart’s call, let alone take a bearing on her.[5] (96)

Earhart sent long dashes on 3105 kilocycles while Galten tried to call Cipriani to alert him to the transmission. But it was no good. Cipriani was trying to conserve his weak batteries and heard only the tail end of Earhart’s transmission.[6] (97)

At 9:35, O’Hare called Cipriani on Howland and told him to “get the direction finder going at all cost.” But it was no good. Half an hour earlier, Cipriani had logged: “All batteries on the island are discharged. Commenced to charge them.” He did not hear O’Hare’s directive and could not have done anything about it if he did.[7] (101)

For the next thirty minutes everything was quiet, but then, exactly on the half hour, government radio operators in Hawaii heard dashes and a weak voice signal, this time on Earhart’s other frequency, 6210 kilocycles. It is not clear whether Coast Guard operators at the Hawaiian Station or army operators at Fort Shafter—or both—heard these signals. Dashes and voice heard together suggest that, once again, the transmissions were being sent using a microphone rather than a sending key. Itasca did not hear the signals; the ship’s radio operators were not listening on that frequency. Howland Island did not hear anything either; Cipriani was still recharging his batteries. There is, however, a report that someone else heard a voice at that moment. (118)

Bearings taken on transmissions after July 2 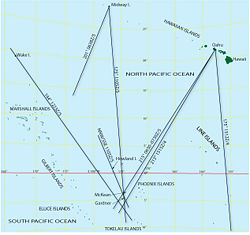 HFDF bearings taken on post-loss transmissions converge on the area around Gardner Island.