Some say "seeing is believing"--but we can't believe everything we see, especially in satellite imagery taken from Google Earth.

The process of capturing, digitizing, combining, compressing, and decompressing satellite imagery often produces digital artifacts (not to be confused with archeological artifacts!). Commenting on the ELP sighting, Ric Gillespie wrote, "Under certain circumstances having to do with the sampling rate (which Jeff Glickman understands and I don't), the software that converts the data set to imagery tends to produce straight lines where none are present. A blob can appear as a series of straight lines and, of course, letters are composed mostly of straight lines. As several of you have pointed out, the human takes over from there."

Jeff Glickman and Photek have done a huge amount of image analysis for TIGHAR, working not from Google Earth imagery (which is a compound of many images shot at many different times and resolutions) but from the best obtainable prints, negatives, and/or digital data files.

TIGHAR receives about two Google Earth sightings of the Electra per week, on average. Some may be rejected out of hand because the aircraft would have to be the size of a Boeing 747 (the planform of the Electra was 55' x 38' 7"); others such as the "Electra on land" in the gallery below are rejected because TIGHAR teams have covered that part of the land or the lagoon and know for certain that what appears in the Google Earth images are not half-buried or sunken Electras.

Click on the pictures to see a larger image and to get the coordinates for use in Google Earth. You can play the "Do you see what I see?" game, too!

Give credit where credit is due 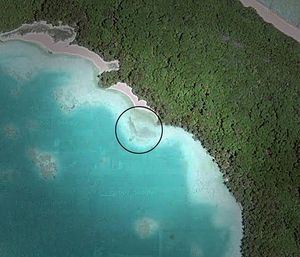 I have been following your journey since the start and all i can say is you guys are looking in the wrong place!

The plane wreckage is in the water on the inside of Nikumaroro Island!

Here is a picture i have pulled off Google maps to show exactly where it is, I've searched and searched the area and there is no other reef that looks like this one, it is a man made structure in the water!!

I would also like to be the one credited when the discovery is made of the plane.

thank you and look forward to hearing from you guys soon.

Received in e-mail 24 July 2012. Our perceptive friend will be given credit if and when the discovery is confirmed.