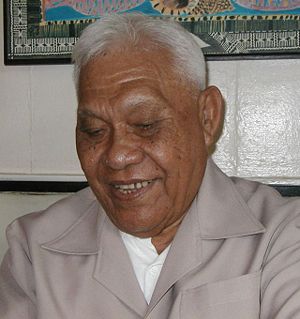 The following material has practically nothing to do with finding out what happened to Earhart and Noonan. It does show some of the dynamics of island life and provides some context for understanding the Phoenix Islands Settlement Scheme.

In 1946, Vaskess helped Tofiga's home community on Vaitupu in Tuvalu (formerly the Ellice Islands) purchase the island of Kioa in Fiji. Fiji has set a limit of 500 for the size of the community on Kioa. (Captain Stan Brown often brought Gilbertese (Tuvalans) through the Taveuni Strait. The hills press close to the water there, and the Gilbertese thought that they were going to fall on them--they had never seen hills before.)

Just about the same time that Tofiga's people were buying Kioa, Banabans purchased Rabi Island and moved about two thousand people there in 1948-49. It's not far from Kioa. Earnings from the phosphate mine paid for the move.

Tofiga was upset with some article or book that, in his view, distorted the true history of Niulakita, the ninth island in Tuvalu (which, if I understood him correctly, means "a stand or cluster of 8"). Tofiga's community had already begun to colonize the island. The British government gave the people of Vaitupu permission to settle Niulakita so long as they cut copra and earned some money to pay for the island. A later administration decided to have Niulakita settled by the community from Niutao. The Vaitupu settlers were "cleared off the island like prisoners. They were treated as if they were trying to steal someone's island." But the fact is that they were there first, even before the British took control of the region, and they had a legitimate contract with the British allowing them to remain there.

The guano from the island has already been fully harvested. But it is attractive because it is the highest island in the group, can be used as a base for claiming fishing rights and may be developed for "crazy Americans who want to live far away from everybody else."

In 2001, the paramount chief of Vaitupu brought Tofiga to the maneaba to tell the whole story of Niulakita. The time allowed was far too short for Tofiga to tell all of the details of the story. He knew the native magistrate personally who drove the original community off the island, and he suspects that someone coached him on how to treat them with disrespect, because the actions he took were out of character for him.

Tofiga hoped that a delegation from Vaitupu might be able to speak in the maneaba at Niutao. He would love to lead the delgation to ask that Niulakita be given back to the people with the strongest claim on it.

Tofiga did not blame the author for the coverup. He did not want to defame anybody. But he hoped that someone could help set the record straight.