From TIGHAR
(Redirected from Emily)
Jump to: navigation, search 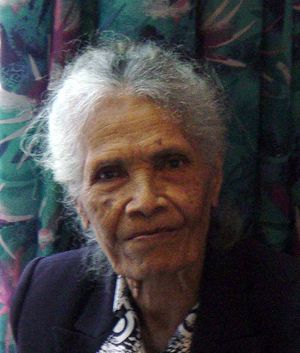 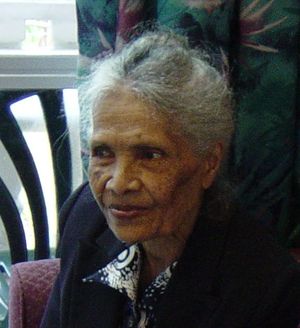 Emily came to Fiji with Tofiga after H.S. in Tarawa to study nursing. Met her husband and stayed here ever since. She and her daughter both seemed to be touched by the presents from TIGHAR. Emily took out a handkerchief and dried away a few tears after looking at the photographs of her parents in TIGHAR Tracks.

Tofiga's wife is a Pedro. She should know where Jack Pedro's son is.

Emily thought that the structures identified as latrines in the photo of village were "small jails" for holding 2 or 3 prisoners. It was the prisoners who broke the coral into gravel for the roads. Emily also remembers a police station of some kind.

When Emily was in the village, there were only four bures (native buildings). She lived in the third of the four.

Her father's workshop was right behind the white man's house. Not far from the beach.

When she was on Niku, there was only one boat house and one boat. The boat was always drawn up on the shore, even when it was fully loaded (?), and a man was always left to guard the boat. Her father never left the boat unattended. He was very strict and very responsible. The boat did not belong to him.

The boat was not far from the workshop. WJ-15.

Roger asked about where she saw airplane parts. Emily pointed to the same part of the reef that TIGHAR believes would have made a good landing zone.

Emily went around the island as much as five times with her father, hunting turtles. He sometimes caught as many as seven. When they were laying eggs, he could follow the tracks to their nest. He would take eggs and transplant them to beaches closer to home so that eventually turtles would nest all around the island. The turtles came in around the coastline, not in the lagoon. They would wait for the high tides to cross the reef.

Emily was the oldest in the family. Her brother died. She got trained to do men's work. She learned how to plant coconout trees, and still does so at age 82. Her daughters are very proud of her independence and her skills.

Little children were kept away from coffins as a sign of respect.

The little box for the bones was rectangular. She does not know whether the top was hinged, but it seemed to open that way. There were handles at either end.

Emily does not remember a dump. People burned things that could be burned. Her father and uncle would dig holes for fish bones and the like. They made use of everything.