Deterioration of a Mirror's Silvering

"Mirror, Mirror, on the Site: How Long Does It Take to Dim Your Light?"

The artifacts in question 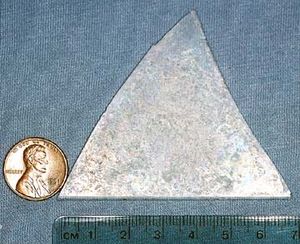 In TIGHAR’s 2001 mapping and test excavation work at the Seven Site, we found the artifact we labeled 2-6-S-18 -- a small, thin shard of flat glass with a beveled edge. In 2007, several meters away, we found artifact 2-8-S-1, another such shard that turned out to fit the first, indicating that the original piece had been a rectangle, about 6.5 x 7.5 cm. in size (and about 2 mm. thick). We immediately suspected that we were looking at the remains of the mirror from a woman’s compact, and in 2009 Karen Hoy found an antique compact on eBay with a mirror that precisely matched artifacts 2-6-S-18/2-8-S-1 in all dimensions.[1]

But neither of our shards showed any evidence of the silvering[2] that gives a mirror its reflective qualities. It seemed plausible that a mirror would lose its silvering in the course of seventy years on the Seven Site, exposed to extreme solar radiation, frequent torrential tropical rains, chemical interactions with the coralline site matrix, microbial action, and the scratching of crabs and birds. However, we could find no experimental or observational data on how long or under what conditions a mirror will lose its reflective backing. So an experiment was in order.

I began with a rectangular mirror that had spent several years on the visor of my pickup truck. Prying it out of its casing, I found that the silvering was sandwiched between the glass and a rather rubbery backing. On June 1st, 2008, I exposed the mirror to the elements by placing it, back (coated) side up, in a gravel filled pond in my backyard in Silver Spring, Maryland. This pond houses the outlet for a pump, which I occasionally turn on to send a small stream of water cascading down to a larger, lower, wetter pond with a resident fish population. Thus the mirror was exposed to sunlight, rain, occasional water baths, microbial action and birds. My backyard lacks crabs, and does not get as hot or bright as the Seven Site, but it was the best surrogate for Nikumaroro I could find.

I made it a practice to turn the mirror over at the beginning of each month, so both sides would get equal exposure to both sunlight/air and the “ground” surface.

On October 1st, 2008, I brought it inside, reasoning that winter weather in Maryland was a poor analog to anything a mirror might experience on Nikumaroro. Casting about for an environment similar to the Seven Site’s, I elected to place the mirror in a shallow pan filled with play sand, mixed with Boraxo to make it chemically somewhat similar to the coral rubble that makes up the Seven Site. I placed the pan on a heating pad under my desk, and every now and then would run some water into it and let it evaporate.

When I turned the mirror over the first time since bringing it indoors, on November 1st 2008, I noted that the borax sand had become quite tightly affixed to the surfaces, especially the backing. It took rather vigorous rinsing with my fingers to get it off, but I took care not to scrape the surfaces in any way.

In November it occurred to me that compact mirrors might be fabricated somewhat differently from automobile fixture mirrors, and on November 30th, while cleaning my basement, I found a little Estee Lauder make-up mirror (not out of a compact per se, but surely the same quality mirror). So I added it to the experiment starting November 30th. It was thinner than the auto fixture mirror, and had a very noticeable adhesive patch on the back.

I continued the experiment with both mirrors in the same manner as before, at the end of each month removing them from their matrix, rinsing the (often concreted) sand off them, and flipping them over so that alternating surfaces were exposed. I began the practice of placing them on a flat-bed scanner and capturing images of each side of each mirror, to create a visual record of what was happening to them. Which, as of the time I began imaging, was not much. However, by early February 2009, pinprick-sized holes were beginning to appear in the backing of the truck mirror, and one small piece of backing had sloughed off during the monthly rinse. By early March the pin-holes were more frequent and obvious. There were also areas in which the silvering seemed to have vanished, so that when looking at the face of the mirror I was looking through clear glass at the rubbery backing.

In early May 2009 I returned both mirrors to the outdoor gravelly pond. The Estee Lauder mirror now showed rusty staining along one side, but was otherwise intact. The truck mirror now had about ten good-sized gaps in the backing, plus pin-holes.

During the summer of 2009, one year into the experiment with the truck mirror and six months into it with the Estee Lauder, it occurred to me that the sand/borax mixture used during the winter was probably a more accurate analog with Nikumaroro conditions than the gravel used during the summer, but that the outdoor exposure to the elements was reasonably analogous to Nikumaroro conditions. Accordingly I elected to combine the two variables, creating a bed of sand (about 90%) and borax (about 10%), with some gravel to mimic the Seven Site’s rubbly environment, in an outdoor birdbath. Placing both mirrors there, I then carried on as usual. I noted little change in either mirror over the next several months. On October 1st, 2009, I returned both mirrors to their winter quarters under my desk. By December 2009, the back of the truck mirror seemed to be thinning, and the several clear areas with neither silvering nor backing were getting larger. The silvering continued to show signs of dissipating, leaving the gray backing showing through the glass. The Estee Lauder mirror showed a pattern of pinholes and patches of vanished silvering, mostly concentrated in the oval pattern formed by the adhesive on the back of the backing. By February 2010 this pattern was quite marked, and pinholes were common all over the Estee Lauder mirror.

The backing of both mirrors showed dramatic deterioration when examined at the end of February 2010. The truck mirror now had clear spots comprising close to one quarter of its surface area, and easily half the surface area seemed to have lost silvering, displaying only the gray backing. The Estee Lauder mirror had large clear areas mostly coincident with the adhesive oval, and large areas where the silvering appeared to have vanished. Clear areas and areas without silvering expanded through March and April. As I write this, in early May 2010, the truck mirror has lost almost half its rubbery gray backing and virtually all of its silvering. The backing is quite fragile; it is hard to avoid losing some of it even in the most delicate rinse. The Estee Lauder mirror is not much more intact.

Thus it appears that a mirror, exposed to conditions roughly similar to those at the Seven Site, loses its backing, and its sandwiched silvering, in about two years. Even if conditions in my Maryland backyard and home office are not perfectly analogous to those at the Seven Site, there seems no reason to think that a mirror’s backing and silvering would survive seventy years in the latter venue. It is possible, of course, that the mercury used as silvering in pre-1940 mirrors was more stable than the aluminum used in modern mirrors, but I see no reason to assume this, and in any event have no pre-1940 mirrors with which to experiment. I anticipate continuing the experiment until both mirrors lose their silvering entirely, but have prepared this preliminary report in case I fail to survive the upcoming Niku VI expedition (One can’t be too careful).