From TIGHAR
(Redirected from Carrington)
Jump to: navigation, search 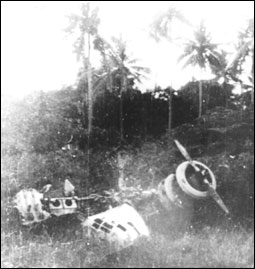 In the late 1980s, Capt. George Carrington, USN (ret.) brought this and another photo to Lockheed Aircraft saying that they had been given to him by a former British seaman who had served aboard the submarine tender HMS Adamant in the western Pacific in late 1946 and early 1947. Carrington said that the seaman, who wished to remain anonymous, had given him the pictures because the wrecked airplane in one of the photos reminded him of Earhart’s airplane on the cover of a book Carrington had just self-published describing his own theory about Amelia Earhart’s disappearance (she was a spy).

The seaman’s other photo showed the beach of a tropical island from just offshore. A group of perhaps 40 men in shorts are standing about on the beach and in the shallow water. Most are shirtless. The level beach extends several hundred feet inland and is bordered by a few tall palm trees behind which the vegetation and terrain rise steeply upward to high jungled hills in the distance. According to Carrington, HMS Adamant had put these men ashore on the uninhabited island for the purpose of gathering sand used in fighting engine room fires and also for a little recreation. The seaman did not recall the name of the island, if he ever knew it. Supposedly he walked along the beach with a friend until they noted a couple of large coconut palms that had been knocked down. Back in the bush they found the wreckage of a twin engined airplane and took the photo shown at right.

"After many years of research and head-scratching, I'm convinced that the Wreck Photo shows a Tachikawa KI-54 "Hickory" advanced trainer. My belief is based upon the visible structural components and especially upon the presence of a small circular inspection plate on the nose."[1]