From TIGHAR
(Redirected from Canton engine)
Jump to: navigation, search 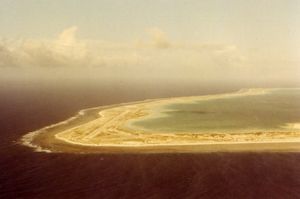 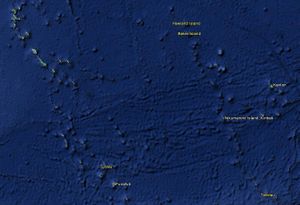 Note: TIGHAR and its sources use both spellings of the name. Both have been (and apparently will be) used indiscriminately in our discussions.

On February 14-16, 1998, a thirteen person TIGHAR team flew to Kanton Island to investigate the possibility that an engine from Earhart’s plane had been inadvertently brought there in 1971 during a U.S. Air Force missile testing program. Bruce Yoho, the individual who recovered the engine in 1971 (and now an active TIGHAR member), came along to show us where he dumped the Pratt & Whitney R1340 which he had found on a reef on one of the other islands of the Phoenix Group. Although he was able to locate the spot, the team was surprised and disappointed to find that the contents of the dump had since been buried.

"Subsequent investigation revealed the story to be, although well intentioned, almost certainly apocryphal" (TIGHAR Tracks, July 2007.) The most likely source of the engine that Yoho worked on is the C-87 crash detailed in the next section.

The C-87 (cargo/passenger version of the B-24) was on a night approach to Canton with a five man United Airlines crew and 16 Army passengers. The pilot did not request, and the tower at Canton did not provide, a current altimeter setting. The airplane simply flew into the ocean about a mile out with the altimeter reading 300 feet. Three men survived, including the co-pilot who was thrown through the windshield. Eighteen were lost. It appears from the report that only one body was recovered--a Lt.Col. Morton.