(The Object Formerly Known as Nessie.)

"I had the pleasure and privilege of spending a couple days with Eric Bevington at his home in the south of England in 1992. We reviewed his journal line by line. He traced out his routes and activities on a map of the island on the coffee table in front of us. We still have that map and a video of the entire interview. The canoe trip with Maude didn't go much south of Bauareke Passage. The wells were dug at the west end where the village would later be established" (Gillespie, Forum). 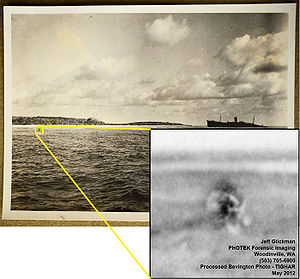 "The photo was one of many that we photographically copied when we visited Bevington. It was just a snapshot in his scrapbook captioned "Gardner Is. and the wreck". The small objects we're so interested in now were not even noticed by him or by us until after I returned from last summer's field work. We made no inquiry about what kind of camera or lens he used" (Gillespie, Forum, 20 March 2000).

"This morning at Rhodes House Library, Oxford University, Jeff Glickman used a new Nikon D800 Digital SLR camera with a 40mm 40mm macro lens and a ring light to acquire a high-resolution image of the Bevington Photo. The image we have now is much better than the 600 dpi scan the library did for us in 2010" (Gillespie, Forum, 26 April 2012).