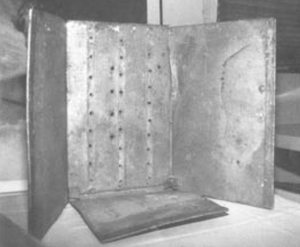 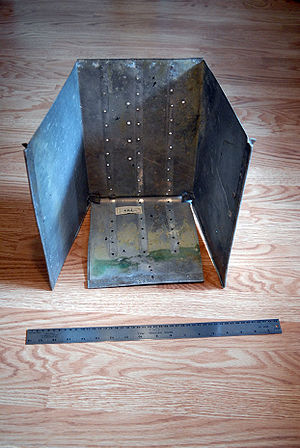 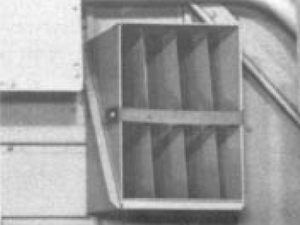 Bookcase in B24 (National Archives).

A nagivator's bookcase found during Niku I (1989).

For a time, it seemed as though this might have been the "smoking gun" that would prove beyond a reasonable doubt that the Niku hypothesis was correct. Further examination of the numbers stamped on the bookcase proved, instead, that it was a Consolidated Aircraft Part Number 28F4023, officially described as Box-Furn., Navig. Book & Paper Stowage. Although designed for the PBY (Consolidated Model 28), this particular bookcase had been modified for installation in a B-24 type airplane. Early examples of the Consolidated Model 32 (B-24C and some B-24D/PB4Y-1 aircraft, a total of 1,653 machines) were equipped with PBY bookcases. Later, Consolidated designed a special bookcase for the Liberator which carried a 32F... part number.

"The best candidate might be the B-24J that crashed on the reef at Canton in 1944 but was not salvaged. We've long suspected that many of the B-24 parts we've found on Niku, such as the navigator's bookcase that was found a few meters from where we later found 2-2-V-1, are pieces of that wreck that washed ashore at Canton after the war and were brought home to Niku by locals who worked there" (Gillespie, Forum, 24 September 2004).

"Based on our understanding of the evolution of the Consolidated Model 32, there shouldn't have been a PBY bookcase aboard a B-24J but I can't find a B-24C or D that was lost anywhere in the region" (Gillespie, Forum, 7 June 2011).

During World War II, more than twenty airplanes were lost in the vicinity of Nikumaroro.

The story begins on the first day ashore at Niku on the first expedition in 1989. Among the junk that littered the remains of the abandoned village was an aluminum box, beat up and partially cut apart. Not the sort of thing you’d look at and immediately recognize as part of an airplane, but it was aluminum and that was good. But we weren’t looking for bits and pieces. For all we knew the whole enchilada was parked somewhere in the bushes just waiting for us to hack our way to it, so hack we did. For three weeks we explored and searched and tried to at least get a general feel for every part of the island. The only place we came across anything that might resemble airplane parts was in the village, and those few pieces --- included the cut-apart box --- had been carefully noted but left in place until we decided what was worth collecting.

When it came time to leave we took a hard look at our disappointing assortment of scrap metal and decided to collect about a dozen artifacts which looked at least vaguely promising. Among them was the box. We liked the fact that it had very regularly spaced rivets and had traces of something that looked like it might be zinc-chromate paint or wash (both indicators of aviation use). Most of all we liked that it had a number stamped into it --- 28F4023. If that was a part number we should be able to find out for sure what the thing was.

When we got home we went to work researching the number and quickly discovered that what we had was an interior "furnishings" (that’s what the "F" means) for a Consolidated Model 28 flying boat, known to the U.S. Navy as the "PBY." The particular fixture we had was "Box - Navigator’s book and paper storage." The next step was to find a photograph of such a beast installed in a PBY and see if it looked like what we had.

The National Archives had photos and, sure enough, there was our box --- except not quite. Our artifact had some straps and fasteners that weren’t in the photos and, although we couldn’t be sure from the pictures, it looked like the mounting holes were wrong. Might we have a PBY bookcase that was actually used in some other airplane? We needed to find an actual bookcase in its original installation aboard an actual, unrestored PBY. Good luck. After an exhaustive search we found an early PBY-5A that had been wrecked in a tornado out behind the New England Air Museum in Windsor Locks, Connecticut. Sho’ nuff. The box was right there on the bulkhead and sho’ nuff, the mounting holes were entirely different from what saw on our box. Despite the part number, it appeared that this Navigator’s Bookcase had never been in a PBY. So what kind of airplane HAD it been in and how did it get to that island? Could it have come from the airplane that we think ended up on that island? The one that we know was specially outfitted for a navigator who would be using the same books that case was designed to hold?

Okay, first question. Is the design of the box old enough to have been available in 1937? Yes, the PBY-1 went into service the previous year. Next question, would the Earhart organization have any access to such a bookcase? Yes, we know that they borrowed a bubble octant from the Navy at North Island, San Diego and there was a PBY squadron based there. In fact, the Consolidated factory was in San Diego. How about the greenish paint? Is there anything about it that would disqualify it being that old? To get that question answered we enlisted the help of the FBI lab in Washington, DC. Their answer --- there’s nothing about this box that would preclude it being aboard Earhart’s aircraft. Cool! But is there any indication that such a box WAS aboard?

A photo of Earhart and Noonan standing before the open cabin door in Darwin, Australia shows a shadowy object on the cabin floor that COULD be the bookcase. It’s the right size, the right shape, but it just isn’t clear enough to be sure. We built a full-scale model of an intact case and photographed it on the floor of a Lockheed 10, duplicating the angle of the Darwin photo. Yup, looks right. We built a scaled-down model of the interior of the cabin and put a scaled down bookcase under the scaled-down navigator’s table. Yup, fits.

We tried to always be careful not to claim that anything was proven, because of course, it wasn’t. It was a tantalizing clue, that’s all, but the press loved it and we got lots of good coverage, not all of it accurate (surprise, surprise). Our critics howled and that generated more press and so it went.

Meanwhile, the answer came from an unexpected direction. We were still trying to identify some of the other aluminum hunks we had collected on the island. One badly bent and corroded gusset-like structure had a part number still partially discernible --- 32B108??? Looks like the same Consolidated pattern. Model 32 was the B-24, Liberator, PB4Y-1 series. "B" meant a fuselage structural component. We never did find a solid match for the rest of the number, but in looking through the parts catalog for the B-24D/PB4Y-1 I started to come across "28F" part numbers. PBY parts in a Liberator? Yup. Mostly interior furnishings. (We’re in a hurry. This thing we designed for a PBY will work fine for now in a B-24. Why take the time to design a whole new part?) Oh my God, I wonder if.... sure enough, there it is, 28F4023 "Box --- Navigator’s book and paper storage." Quick to the National Archives. Find a photo. Yes, there it is in all its glory, exactly like the one we found on the island, fasteners and mounting holes and all.

Two years of research but we found the answer. It wasn’t the answer we would have preferred but even a disappointing answer is far better than no answer at all. How did a B-24 part get to the island? Most likely from Canton. At least one and possibly more B-24s were wrecked there during the war and others may have been modified (eventually Consolidated came out with a bookcase especially for the Model 32 with a "32F" part number). After the war lots of settlers from the PISS worked for the airlines on Canton. Plenty of opportunity to bring home useful stuff.

So that’s the story of the map case.